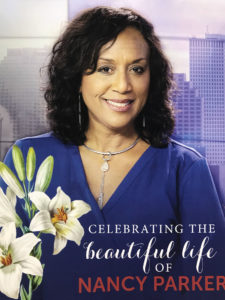 Nancy Patriece Parker Boyd was born in Opelika, Ala. on July 27, 1966 and had a long career in journalism. She began her career as a reporter at WTVM Channel 9 in Columbus, Ga. From there, she moved to WSFA Channel 12 in Montgomery, Ala. as a morning cut-in anchor/reporter from 1989 until 1990. A few years later she moved along with her husband, Glynn Boyd, to work in Baton Rouge at WAFB-TV Channel 9. Parker then became weekend anchor at WVUE Fox 8 News and continued in various anchoring positions there where she earned both Emmys and Edward R. Murrow awards.

“Nancy Parker was Fox 8,” said Mikel Schaefer, the news director at Fox 8. “When she walked into the room, news room, or any room there was an explosion of light and color. She was the light that guided all of us. I have worked with some of the most talented journalists in the country and no one has been better,” Schaefer added.

Schaefer said that he loved Parker and he was blessed to have her in his life. “She was eight times a lady,” Schaefer said. He assured the audience that everyone from Fox 8 will love her forever.

“Nancy Parker fell in love with Glynn Boyd, but she got stuck with me,” said John Snell, 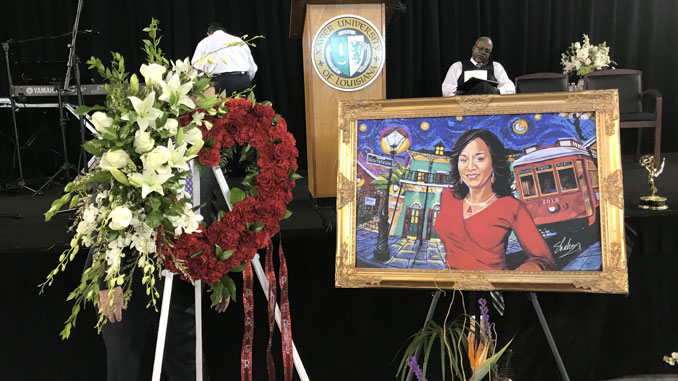 Parker’s co-anchor at WVUE Fox 8 News. “I saw her audition tape and it was like gold. She was talented and she was a natural,” Snell added.

Snell, who has been a New Orleans news anchor since 1983 reflected on his time as co-anchor with Parker on evenings. He shared with hundreds of mourners how Parker had wonderful chemistry with whomever she worked. “She treated everyone the same way no matter who you were,” he said. Parker balanced the roles of broadcaster and mom well, Snell said.

Parker forged relationships across all lines: political and civic. She managed friendships across local, regional, statewide and national politics.

“One thing we knew when Nancy spoke, was it was about the story and getting that story right,” said Mayor Latoya Cantrell. “As I moved about the city of New Orleans, that same feeling of loss and shock seemed to be embedded in every citizen in this city,” Cantrell added of public response to Parker’s untimely death.

Cantrell added that the city didn’t just lose an amazing journalist or a familiar face on television screens, but they lost a mother, incredible human being, and a valuable member of the community. Parker was a trusted friend to many New Orleans viewers, Cantrell told members of the public.

Glynn Boyd was married to Parker for 25 years and the couple had three children together. They met in Tuskegee, Ala. where she asked him to assist her with her camera. He, too, was a struggling journalist at the time and wanted to beat her to a story. That was the beginning of the young news couple’s relationship.

“I want to thank everyone for being here,” said Boyd, who serves as the public information officer for the Jefferson Parish Sheriff’s Office. “The response has been overwhelming, and the support has been wonderful. She was a very special person,” Boyd said, adding that despite his loss, their marriage will last a lifetime.

Residents and friends of Parkers honored her with a second line from the Convocation Center to the Fox 8 station. Although it was a sad time for her friends and colleagues, the procession to the station made the moment a time to celebrate her life. Parker’s family created the Nancy Parker Scholarship Fund in honor of her for the Community Foundation of East Alabama. The scholarship will be awarded to a senior at Opelika High School to demonstrate her commitment to education and just how important it was to Parker.