Somewhere it’s raining. Somewhere the heavens have opened up, reflecting the tears that are falling across the globe as news of the death of Civil Rights Icon Congressman John Lewis (D-GA) spreads.

The legislator, freedom fighter and justice warrior, who was famously beaten, bloodied and arrested in Selma, Alabama — and in other cities across the Jim Crow South — during the struggle for civil rights and racial equality, was 80.

His death came just hours after another the passing of another civil rights icon, Rev. C.T. Vivian, who was 95. National Newspaper Publishers Association (NNPA) President and CEO, and comrade in arms with both Rev. Vivian and Lewis, expressed the devastation he and the world feel at the loss of the two revered giants.

Chavis, like Vivian and Lewis, worked with and was a disciple of Dr. Martin Luther King, Jr. He said the world would miss Lewis’s “good trouble,” quoting Lewis’s famous call to arms. “The Honorable John Lewis was a longtime master freedom fighter who set the eternal example of how and why we all should fight for the freedom and equality of all humanity,” Chavis remarked.

“May Lewis now have his rest in peace. As for those of us who worked with him and [those] who marched with him, we must keep fighting for freedom and equality with renewed vigor, courage and energy. Black Lives Matter.”

During the NNPA’s 2020 Virtual Annual Convention earlier this month, attendees were treated to a free screening of the documentary, John Lewis: Good Trouble, provided by the Census Bureau. Lewis was also a strong advocate for Census registration.

“John Lewis – one of the original Freedom Riders, Chairman of the Student Nonviolent Coordinating Committee, the youngest speaker at the March on Washington, leader of the march from Selma to Montgomery, Member of Congress representing the people of Georgia for 33 years – not only assumed that responsibility, he made it his life’s work,” Obama observed.

“He loved this country so much that he risked his life and his blood so that it might live up to its promise. And through the decades, he not only gave all of himself to the cause of freedom and justice but inspired generations that followed to try to live up to his example.” 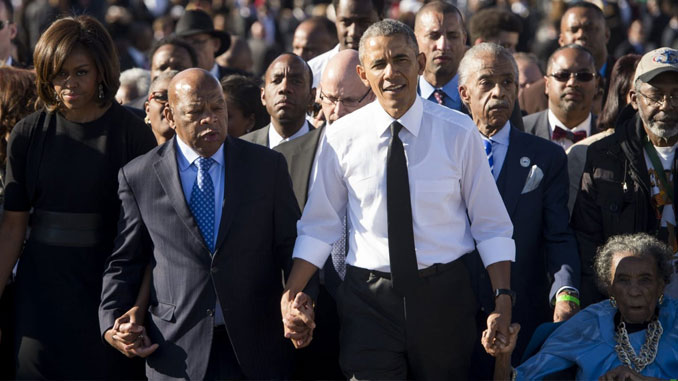 The former president recalled his last meeting with Lewis.

“It’s fitting that the last time John and I shared a public forum was at a virtual town hall with a gathering of young activists who were helping to lead this summer’s demonstrations in the wake of George Floyd’s death. Afterward, I spoke to him privately.

“I told him that all those young people – of every race, from every background and gender and sexual orientation – they were his children. They had learned from his example, even if they didn’t know it. They had understood through him what American citizenship requires, even if they had heard of his courage only through history books.”

Lewis routinely credited King and Rosa Parks for inspiring his activism, which he famously called “good trouble, necessary trouble.” He also referred to his participation in the Civil Rights Movement as a “holy crusade.”

Lewis joined a Freedom Ride in 1961, organized by the Congress of Racial Equality (CORE). He suffered one of many beatings at the hands of authorities when he and other CORE members attempted to enter a Whites-only waiting room at a bus station in Rock Hill, South Carolina.

“If there was anything I learned on that long, bloody bus trip of 1961,” he wrote in his memoir, “it was this — that we were in for a long, bloody fight here in the American South. And I intended to stay in the middle of it.”

Lewis was the last surviving speaker from the famed 1963 March on Washington for Jobs and Freedom. The world also will remember Lewis for leading hundreds of people in one of the most famous demonstrations for civil rights ever – Bloody Sunday.

On March 7, 1965, as Lewis and others journeyed across the Edmund Pettus Bridge in Selma, Alabama, a mob of state troopers clad in riot gear attacked.

The authorities began their onslaught on Lewis and the other marchers using tear gas before brutally escalating the assault to bullwhips and rubber tubing that had been wrapped in barbed wire.

One of the cops attacked Lewis with a nightstick, fracturing his skull and knocking him to the ground.

In the aftermath of the police killing of George Floyd, Lewis praised this generation of freedom fighters. “This feels and looks so different,” he said of the Black Lives Matter Movement and other ongoing demonstrations.

“It is so much more massive and all-inclusive. There will be no turning back.”

Dr. King once said that, “Our lives begin to end the day we become silent about things that matter.”

In words, deeds, actions, thoughts, influence, practice, and conscience John Lewis was rarely silent about the things that matter. For this reason, and for so many others, his legacy will remain alive forever.

New Orleans Agenda The American Heart Association, the world’s leading nonprofit organization devoted to the world of healthier lives for all,
X
About LA Data News 1611 Articles
Lighting The Road To The Future
Website