Anthony Bean Community Theater (ABCT), has for over two decades made an impact in the community using the arts as a way to engage them in pursing excellence in the arts as well as life.

Bean is now launching a new endeavor, a TV program called “What’s Going On” where he hopes it can have a positive impact on the community. Bean says it will give teenagers a chance to speak out on issues they face every day. 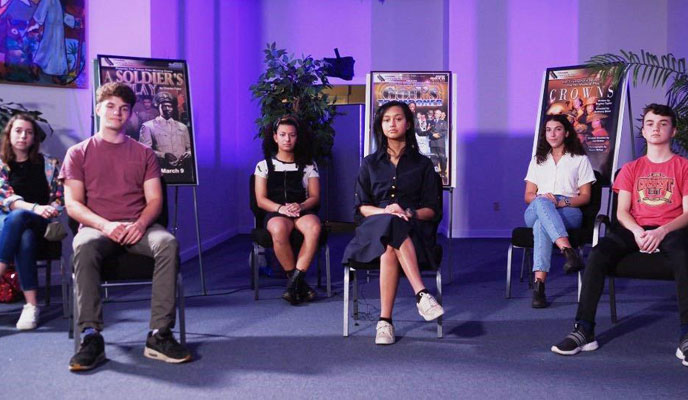 The show also includes dramatizations of selected topics and issues teenagers struggle with, and the teens will further explore the causes and offer solutions. Other subjects will include the BlackLivesMatter Movement, sex, fears, drugs, life, loss, crime, challenges, bullying, theft, racial discrimination, and systemic racism.

“What’s Going On” will feature interviews with community leaders including New Orleans Mayor LaToya Cantrell, Health Educator Dr. Corey Hebert and a special episode sponsored by former City Councilman Arnie Fielkow focusing on Black and Jewish teens discussing racial relations. The discussions directly focus not only on the problems but also provide tools and resources for solutions.
Data News Weekly reached out to the show’s co-hosts where they spoke about the program and what people can expect and how the experience impacted their lives.

Samantha White
“What’s Going On” was such an enlightening show to be on. As a teen, I learned from each topic discussed on the show. I want teens to take something from “What’s Going On.” I hope the show makes the youths more aware of being Black in America. To Black teens out there, your skin is beautiful! As a race, we should not be brought down by standards set in place for how Blacks should look, act, and live. I want the youths to realize their worth and standing up for what’s right, regardless of race. “What’s Going On” uses New Orleans’ locals to teach the youths that we have more power than we know.

Benjamin Sulcer
On “What’s Going On” I had so much fun getting to know everyone and getting familiar with how production is done. The subjects we talk about on the show are some of a large number of topics that need to be talked about. I learned a lot about social issues, social politics, and the overall knowledge of my people. I hope every teen will watch and see the bigger picture and choose to educate themselves further on these matters. My vision for the City is that we become closer and put an end to the oppression of every person regardless of race or religion. Lastly, the way I see the world is that we are separated, and we need to come together to make an impact on the planet.

Amira Konate
My experience with being on “What’s Going On” was terrific. While on the set, I felt so much support and love from the cast and crew. We pushed and encouraged each other to be confident and to do better than they had in the last show. Being on the show was like being a part of a big family. This show will help a lot of teens and tweens, and it has helped me already.
I have learned about people who are different and who deserve respect. I have learned about the perseverance of local actors and actresses. While teens watch our show, I think they’ll be able to learn some of those things and more. My hope is that teens see someone on “What’s Going On” that they felt spoke to them or that represented them. I also hope that teens can learn to love themselves from watching our show. After our show premiers, I’m sure that the city can learn to accept and respect others, love each other through the historical pain, and to respect community leaders.

Kairie Simone
In my opinion, ABCT Teen Talk is truly “one of a kind” because it allows us as teens to come together to discuss relevant issues impacting us. Where can we freely talk without someone saying, “you don’t know your only a kid” or referred to a conversation being strictly for “grown folks.” Also, the show is a platform where I am free to converse with others without fear of judgment by others. Our voices matter, and they have people who do care about us.
It was empowering and such an honor in interviewing our first Female Mayor, Ms. LaToya Cantrell, about the pressing issues and concerns negatively impacting our City. As well as discussing COVID-19 with Dr. Corey Hebert, known to many in the City and nationally as “The Doctor for The People,” speaking to help alleviate some fears about the Pandemic. Also, interviewing some of our local actors who’ve contributed significantly to ABCT like Mr. Lance Nichols, Ms. Gwendolyne Foxworth, and Mr. Joshua J. Williams in learning their stories, providing advice for someone like me who is interested in pursuing a career in drama.
My experience on the show was out of this world. The camera crew, director, and makeup artists were phenomenal. They always kept you motivated and had a lot of good energy!
Not to mention, one of my favorite episodes was interviewing Jewish teens who helped me to better understand in learning that despite our cultural differences we still have the same struggles. It opened my eyes to see that we, as people are more alike than different in the world regardless of race, creed, and religion, etc. I hope that other teens learn again that our voices matter, we must stick together so that we can make a difference in the world. Growing up in the world in which we live can be shocking and fearful due to violence, but change is possible. My vision for this city as I grow is that we have done better. We clean up our City and stop the violence. I wholeheartedly believe that we can get better by being a part of the change. We are the next generation that can and will make a difference. And I plan on being a part of it.
Furthermore, ABCT Talk is needed in the community because it allows a safe space for teens to discuss social issues and a positive way to do so.

For over two decades, the Anthony Bean Community Theater has been making an impact in the community.

“What’s Going On” will feature a special episode sponsored by former City Councilman Arnie Fielkow focusing on Black and Jewish teens discussing racial relations. The discussions directly focus not only on the problems but also provide tools and resources for solutions.

ABCT Founder Anthony Bean and New Orleans Mayor LaToya Cantrell, with ABCT Kids on the set of “What’s Going On” a local show aimed at addressing a variety of issues.

Dr. Corey Hebert, is one of many guests who appears on the show to discuss issues that affect the New Orleans community.