In an election year plagued with an unexpected pandemic, social unrest, several storms, and a string of wildfires, the killing of Breonna Taylor sent shockwaves throughout the nation. From Louisville, KY to almost every portion of the country, Americans demanded justice. Instead, a grand jury only indicted a former Louisville police detective on Sept. 3, 2020, for wanton endangerment of Breonna Taylor’s neighbors by recklessly firing his gun during the infamous raid on Taylor’s apartment that resulted in her death. Still, two other officers who fired shots during the raid on her apartment did not face any charges.

“The outcome of Breonna Taylor’s case will without a doubt have a lasting impact on the Criminal Justice System,” said Brandon Brisco, a Practicing Attorney in the Greater New Orleans area. “We are already seeing cities such as Louisville, KY, Memphis, and a litany of others who are now banning no-knock search warrants for starters,” Brisco said.

These reforms are a small step in preventing future tragedies, Brisco noted, and they also hold officers accountable by removing previous protections that resulted in forms of impunities from their actions.

“These laws will provide for the much-needed transparency from our local officials and police departments,” Brisco said. “We have a long way to go, but Breonna Taylor’s name will forever be at the center of conversation when we speak of justice reforms and the need for change.”

The Criminal Justice System’s response to Taylor’s death contrasts to that of George Floyd’s where all officers involved were charged in his murder. The ruling of Taylor’s case has reinforced for Black women the idea that this country does not care for them or their male counterparts.

“When they announced that the officers weren’t going to be directly charged for Breonna Taylor’s murder, it reiterated that we live in a society where Black lives and bodies are not valued unless for monetary purposes,” said La’Shance Perry, a Xavier University of Louisiana student who shared on social media about her own encounter with forced police entry into her apartment.

“Why must I demand that my life matters? Why must I repeatedly prove that my Black skin isn’t a threat?” Perry asked. “Why are Black women tasked with being the healers, leaders, uplifters and protectors of a nation that brutalizes, traumatizes, demonizes and destroys us?” she asked.

Taylor struck a chord with Black women in particular because law enforcers were after a male suspect, but she lost her life as a result.
“Her lack of justice proves that Black women aren’t cared for,” she said. “Breonna Taylor’s death signifies that we must protect Black women by any means necessary.”

The indictment of former police detective Brett Hankison, who was found guilty of Wanton Endangerment as he fired his gun recklessly during the raid on Breonna Taylor’s apartment, caused many to question the integrity of the justice system as they believe that the charges were not directly related to Breonna Taylor.

The questioning of the justice system’s integrity has resulted in even more focus on the importance of voting in November, particularly through early voting.

“The upcoming election means a preservation of freedom,” said Sharon Brinkley, a local real estate agent. “The freedom to move freely without the fear of being terrorized by a hate group or the police,” Brinkley said. “As a Black woman in America, I see no difference between the two because both groups have caused pain, fear and death to Black people that can’t be undone.”

While the upcoming election is a focus point for candidates on how the justice system handles matters similar to that of Breonna Taylor’s, her case, for African Americans, currently represents the systemic racism of law enforcement and criminal justice in the country.

“The system failed us,” said 53-year-old Glenda Lindsey, a tourist visiting New Orleans. “What else is new?” Lindsey asked as she shook her head frustratedly at the common occurrence of Black lives being claimed at White police officers’ hands. “That’s all I have to say,” she said. “The system failed us.” 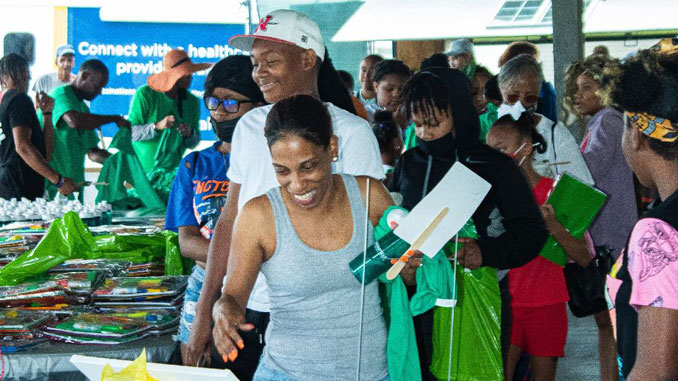