Why was Drew Brees’ led group given extra time to improve their proposal?

Maybe not. But it might as well have. At least that would’ve been a more honest dismissal, as opposed to the shenanigans that went down.

Imagine the scenario. The city establishes an oversight committee and puts out a call for proposals to finally transform the long abandoned Six Flags Site into something not so abandoned, a site that residents of the East could be proud of. They go about this process with little input from those residents, then set a deadline for May 11th to make a final decision. 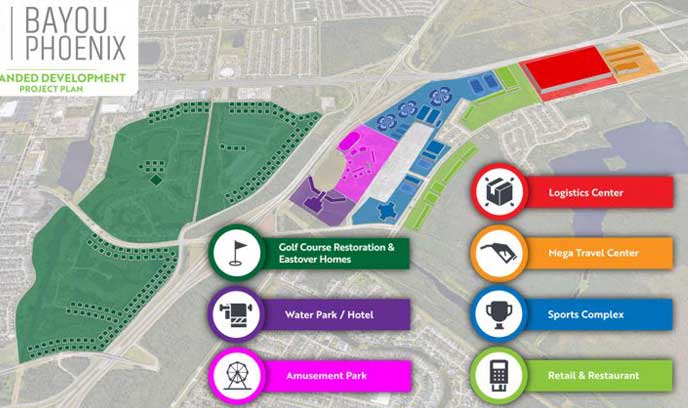 So, the moment comes. The grand unveiling. Two proposals stand out, one led by local business consultant Troy Henry. It includes an indoor/outdoor water park, a logistic center, a travel center, a hotel, a sports complex, a redeveloped Eastover Country Club, and an expansion plan to include an amusement park. The new name is Bayou Phoenix. The other is led by Drew Brees and Demario Davis. Its’ centerpiece is a local farm. The farm will be used to teach kids how to grow crops. Yes, crops. In an area as economically starved as the East, one of the top proposals was one that would use acres of land to grow crops. It would also include a water park and food truck park.

So of course, the decision was a no brainer for the committee. With over 200 of the 300 responses from residents of the East that were present supporting Bayou Phoenix, the committee did the most logical and obvious thing a biased committee could do. It ranked the Drew Brees led proposal as number 1 on the list with Bayou Phoenix coming in a close 2nd. Rather than just outright award the contract, because the two were apparently “so close”, the committee then concocted a run-off scenario. Or as they said a 30-day window for both to tweak their proposals. Then a decision will finally be made.

Why was Drew Brees’ team given extra time to improve their proposal? The score sheet containing the basis of the ranking was not made available to the public. But Troy Henry said that he has requested it.

Whatever the justification, the committee’s decision left many in the community baffled. “Something is rotten at the top of the chain,” said Tangie Wall, member of N.O. East Matters. “Nobody from the committee ever asked the East how do you feel. It just wasn’t a fair process.”

It’s a point that’s hard to argue with. Troy Henry is a resident of the East and a highly successful businessman. His team canvassed the community to see exactly what was wanted, needed, and financially viable. He then went out and got the financial backing for Bayou Phoenix from Hillwood, a prominent investment company, so it’s sound. The Drew Brees led proposal, on other hand, only has an iconic name behind it. But the East doesn’t need icons. It needs the economic growth that businesses will bring, as opposed to a farm.

“We looked beyond the iconic,” said Wall. And when speaking of Bayou Phoenix, she said, “We feel it will provide the substantial economic development the community needs.”

What’s needed now is for the committee to come to the same conclusion in 30 days. “We’ll be as responsive as we can be,” said Henry when asked about responding to any tweaks the committee may request.

In the meantime, the best thing residents of the East can do is to state their preference and state it loudly.

“It’s time for the East to rise up,” said Wall. “We’re not intimidated or backing down.”

She’s right. For too long the East has been neglected and disrespected. The committee’s decision to give the Drew Brees led group a do-over is just another example of decades of disrespect. It’s time for that to come to an end. Get in touch with our mayor and City Council representative. Let them know that what’s more important is the economic impact of the plan, not the name behind it.