The tender, juicy, crunchy, and sometimes salty endulgence of fried chicken is an integral part of the culinary culture of African Americans across the south. In New Orleans, the love of fried chicken brought people from all around the world together to experience America’s favorite Southern dish. At the fourth annual National Fried Chicken Festival held three days this year from Sept. 20 to 22, at the Woldenberg Riverfront Park, over 100 vendors and food trucks participated in this event to show the numerous ways of how fried chicken can be prepared.

“Although there are numerous ways to prepare chicken, we start with letting the chicken marinate, then batter it with our seasoned flour, next you fry the chicken so it can be extra crispy, the best part is all of our sauces are in house,” said Rebecca Elizabeth Hollingsworth, who with Stephen Maher, are the owners of Bonafried food truck.

The team said the festival allows them to set up stalls and cook outside of their food truck. They noted that despite rain on Saturday, the festival still had good turn out from tourists and residents. Festival goers estimated the festival attracted over 200,000. “Everyone stayed in line to get our best seller chicken sandwich,” Hollingsworth said. 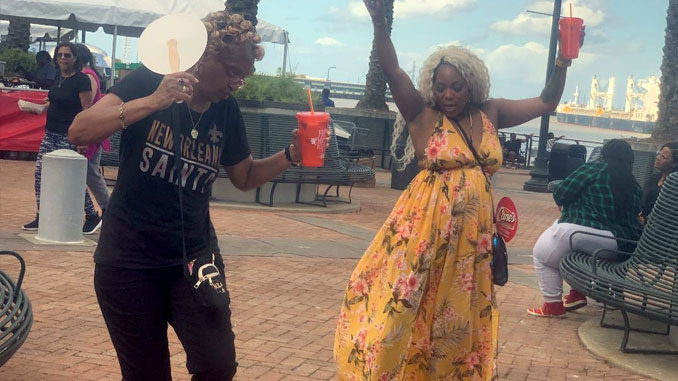 On the festival’s last day, local stations broadcasted the Saints and Seahawks game rallying the Who Dat Nation, turning the event into a cause for celebration. As festival-goers watched the game and ate fried chicken, a crowd in the Crown Royal tent began to show off their best dance moves to “We Are One” by Maze and Frankie Beverly.

“Watching people come out to dance, eat and enjoy life was good to see,” said Tia Dorest, the daughter of Chef Jeffery Heard who founded the Heard Dat Kitchen in Central City. “My father worked in a fine dining restaurant with no culinary background. But, every time he met tourists, they wanted a good family style restaurant to eat at. My father believes his cooking has blessed others and it’s truly his God given talent,” Dorest said of the family business.

The preparation of the fried chicken at the festival showed the versatility of chefs and restaurateurs as they baked, barbecued, fried, and smoked different cuts of chicken. Some tents allowed festival-goers to observe the chefs and crew as they marinated and dropped chicken cuts into the grease. The first, hot bites of fried chicken was what customers said they came out to the festival for, and the mix of sauces and sides that had them licking their fingers, with each dip. 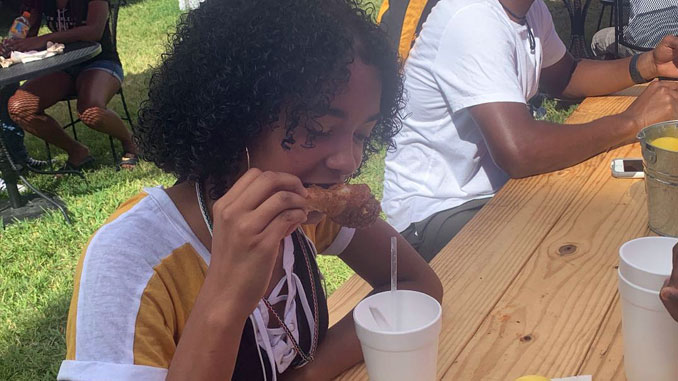 “The fried chicken festival is about community,” said Marissa Scott, who attended the festival. “People coming from all around the world to enjoy the same dish, fried chicken. Back home when I would fry chicken for my 6-year-old, he would take a bite, lick his fingers and say chick’n lick’n and that meant that the chicken was exceptionally good. Today, I must say chick’n lick’n and lick my fingers because that’s how I feel about the food today,” Scott said.

As the day came to an end, Gus’s Fried Chicken was crowned the winner of the Best Fried Chicken at the festival. The ability to serve the chicken straight out the grease impressed customers and the comfort food made people feel as if they were back home.

“When I took that first bite, it felt like heaven on earth,” said Renee Brown, from Dallas, Texas, who said she sampled the winning fried chicken. “It’s been years since I smacked that hard on a piece of chicken. It felt like my mama chicken, hard and crunchy. I guess, I had to travel all the way to New Orleans to feel this good. My soul felt warm, that’s the meaning of comfort food…..you feel good from your head to your toes,” Brown said.

Photos by Hannah Shareef,
Residents enjoy food an entertainment on the final day of the National Fried Chicken Festival on Sunday, Sept. 22, 2019 at Woldenberg Park.