The Road to Recovery
In the aftermath of Hurricane Ida, that left much damage from Louisiana to the east coast of this nation, this catastrophe left many with questions about their city and their lives more generally. In light of this disaster a great exodus took place as hundreds of thousands of people; many of whom experienced the waters of Hurricane Katrina and some spending the following horrific days in the Superdome, the Convention Center or on rooftops now sought refuge.

Sixteen years to the day of Katrina, the resilient people of New Orleans many left, while others braved it out. In this expose, I paint a picture of not just these individuals, for they are simply examples of the collective spirit of a people. One that values people, family, community and love, over property and possessions.

The journey to recovery is one that is just beginning for a city that over its 300-year history has seen its share of natural and man-made disasters.

Exodus…The Memories of Life After Hurricane Ida
“We formulated a plan and we drove to Alabama, which was the best decision we could have made. I took a page out of my late father Paul Beaulieu’s book and got us out early before the mayor asked people to evacuate. We stayed there then went to Atlanta and eventually went to my aunt’s house who lives in Chapel Hill N.C.,” says Samantha Beaulieu, an acclaimed and accomplished actress from New Orleans.

“I didn’t want to take a chance with my family experiencing a catastrophic event,” remarked Charles Dickerson, an educator, who’s worked in both New Orleans and Houston. “Going to Houston is something that gave me a sense of normalcy, because I have other children there and I’ve lived there before.”

Charles Vaughn is also an educator, mentor and visual artist. He chose to stay behind with his family. “Leaving was an option for me, but I did not want to leave my family in harm’s way, so I decided to ride out the storm and I had my oldest daughter with me at my home in Gentilly. I stayed up during the storm and watched it as trees and power poles went down and eventually the lights went out.”

Reflections…The Morning After…Lights Out
Ida passed over the city and as expected left much damage while the levees did not breach this time, the power went out leaving the entire City of New Orleans without power. This left many who stayed experiencing the unrelenting heat as well as potentially being unsafe as night fell in a city of darkness.

“I have a neighbor who stayed and he’s suffering with the heat, and so many other quality of life issues. Right now, it does not sound like anything I want to rush to get back to. But one thing I can say that is encouraging is that billions of dollars and 16 years later that the levees held,” said Samantha Beaulieu.

For many elderly citizens, these conditions are not the most favorable for them or anyone with special needs. Some will take a sit it out and wait approach before returning. “It is home but going back is not in my best interest right now,” says Barbara May, a retired educator from uptown New Orleans, who stayed during Katrina and when the levees breached wound up having to walk in waist deep water seeking refuge and eventually making it to the Superdome before heading to the D.C. area for several years while her home was being rebuilt.

During Ida, initially, she was reluctant to leave, but her son Jeffrey May, an urban planner who lives in the Washington D.C. area happened to be in town on business and encouraged her and other family members to evacuate.

They evacuated to Houston and are presently in the D.C. area, while Jeffrey is planning to return to survey the damage done to their family home. “I am glad I was here for my mother and able to make sure she and other family members were safe, says Jeffrey May.”

While not a catastrophe like Katrina, the city still must rebuild, and questions about how it will be done and what the priorities will be is paramount.

“I left with my son who is beginning his freshman year at St. Augustine High School and some of my family members and went to Florida. It wasn’t planned, but I was also in the same hotel as my next-door neighbor. These are tough times for the city, with COVID-19, now this leaves a lot of questions about the city’s future and direction,” says Jamie Jones, a dedicated father and educator.

While climate change is not at the forefront of conversations during this election season, perhaps it should be according to Samantha Beaulieu, “Climate change is a major issue, and we can no longer ignore it and we must elect people to office who will make it a priority.”

As always issues of equity and some without resources to evacuate is a problem. “Some people just didn’t have the means to leave and then have to come back and pay bills, which in some cases are already behind” says Charles Vaughn. “Maybe as a solution emergency funds should be made available for a storm before it happens not after. That way people can have the resources they need for themselves and their loved ones.”

The Silver Lining…Family, Friends and Loved Ones Matter
In these tough times, the one thing that can get us through is family and friends. It is one of those things that can put a smile on our face and joy in our hearts even through these uncertain times.

“I think back to Katrina and that I was getting to spend time with my 90 something year old grandmother. And now it is wonderful seeing my aunt and my first cousin who is here to see her mom. It takes you out of all the misery of New Orleans. I can say having the love and support of family and friends during these times are a blessing,” says Samantha Beaulieu.

In these times it is important that people return with a renewed focus on doing the right things and being their best selves, showing the world a spirit of resoluteness and resiliency as we rebuild. This sentiment is echoed by Charles Dickerson.

“Some are speaking of leaving and I understand their frustration, but I don’t want to leave the city because I want to stick it out to make this a better city. I believe in Each One Teach One Grab Everyone. We have to stay focused, be diligent, be thankful for the little things and keep pushing.” 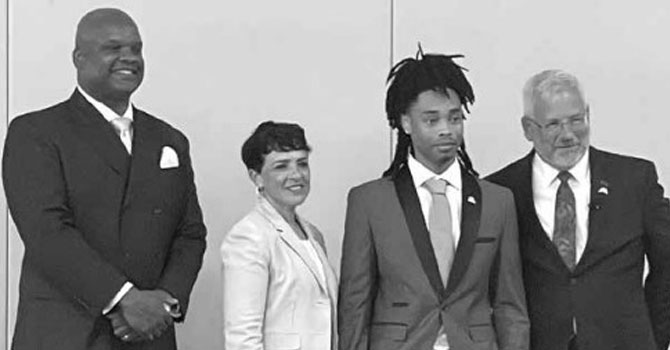