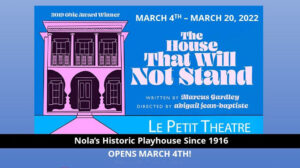 The play’s storyline involves a Black Creole woman named Beartrice and her three unwed daughters and an old New Orleans custom of rich White men entering into common-law marriages with young women of color. But the house that Beartrice built – on a foundation of wealth, freedom, and secrets – threatens to collapse after her man mysteriously dies and her daughters realize that his money could cost them the people they love. The House That Will Not Stand is a humorous and gripping family drama told in a rich and lyrical river of words.

The show is directed by Abigail Jean-Baptiste who recently served as Assistant Director of Broadway’s Jagged Little Pill. Born in New York City with family roots in Haiti and the American South, her work intersects with critical race theory and reimagines understandings of the past. She has directed shows in New York and elsewhere in the U.S. and has won a number of prestigious awards.