On Thursday, Sept. 24th from 12 noon to 1 PM, National Urban League President and Former New Orleans Mayor Marc Morial will be making an appearance and book signing at Melba’s Po Boys to promote his book “The Gumbo Coalition: 10 Leadership Lessons that Help you Unite, Inspire and Achieve.” 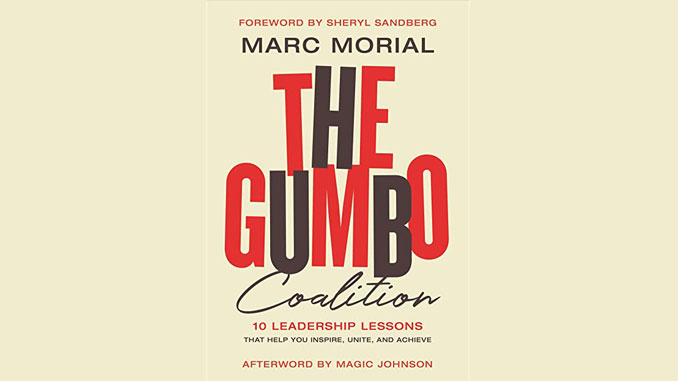 The book is in part a political memoir, and a leadership manual. Morial is effective in drawing from his many years of being around groundbreaking leaders and being one himself leading a City as Mayor as well as an historical Civil Rights organization. This book is a great read for anyone who is interested in how to become an effective leader regardless of their background.

Morial knew his calling from a young age–he was meant to be a leader in the fight for meaningful change as he was on the frontlines of seeing the reins of power shift in New Orleans, as his father Ernest “Dutch” Morial became the City’s first Black Mayor.

Less than two decades later, in his own mayoral race in New Orleans. Morial built what he christened the “Gumbo Coalition,” an incredible mixture of all of New Orleans’s ingredients–African Americans, Whites, Latinos, Asians, business leaders, grassroots community activists, business leaders, clergy, and many more. Each ingredient brought its own flavor, creating a dish that was able to reduce crime and rebuild New Orleans’s reputation with such power that the city was able to successfully attract an NBA franchise, multiple Super Bowls, and the Essence Festival, the largest African American event in the nation.

Now, Morial fights on behalf of the National Urban League to create a community with a voice so strong that nothing can stand in the way of change. He is ready to teach others what he has learned along the way, by showing readers what it means to be a leader who can unite voices and create meaningful change.

This book is a great recipe for those interested in leadership and is a must read.