The implementation of renewable energy sources in homes and businesses was the second largest growing industry in America in 2019. This year, Louisiana also ranked number five in the country for pollution through emissions from the burning of fossil fuels, according to the U.S. Energy Information Administration. Only Texas, California, Florida and Pennsylvania ranked higher for total state carbon dioxide emissions coming from residential, commercial, industrial and transportation sources. Renewable energy advocates say they want New Orleans residents to know how they can contribute to reducing the state’s carbon footprint, which impacts climate change, of which the City of New Orleans remains most vulnerable. 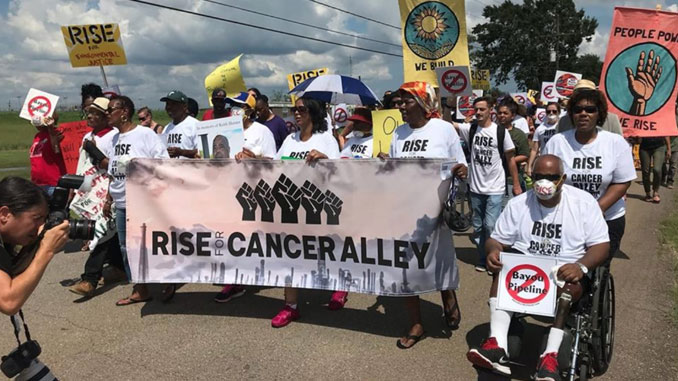 “Right now, for the first time, we can generate electricity to Louisiana and around the world, in a way that doesn’t produce pollution and does not harm children and families, and that’s tremendous,” said Attorney Monique Harden, the Assistant Director of Law and Policy and the Community Engagement Program Manager for the Deep South Center for Environmental Justice.

On March 28, 2019, the New Orleans City Council’s utility, cable, telecommunications, and technology committee proposed a solution to the problem of the city’s emissions levels. The idea was to establish rules and standards for the City of New Orleans under a Renewable Portfolio Standard Resolution that the city must be held accountable to. It would also require all new power sources to come from renewable energy. The city would become the first in the Gulf South to set such standards.

“New Orleans is on the frontline of climate change and it requires urgent action,” said New Orleans City Councilmember Helena Moreno in a statement. Moreno chaired the utilities committee that introduced the RPS. “Through collaborative action with our partners in the public and private sectors and an assertive policy direction like an RPS, we know that New Orleans can extinguish its reliance on carbon-intensive generation.”

The Deep South Center along with Audubon Louisiana and the Energy Future New Orleans Coalition kicked off a campaign to educate residents about the effort to shift the city to renewable sources by 2040. The city’s proposal and other plans were presented by the Deep South Center and its partners to residents in the city on Sept. 18th at the Broadmoor Arts and Wellness Center and on Sept. 23rd at the Norman Mayer Public Library in Gentilly.

The Energy Future New Orleans Coalition announced the plan of slowly cutting the usage of fossil fuels in New Orleans and installing solar, wind, and electrically powered devices to meet the needs of the standard of living for traditional homes, as well as businesses and government buildings. Hence, the group set the 2040 date for the public-private coalition to at least hit this margin.
The Renewable Energy Coalition discussed how highly polluted areas of New Orleans also happen to be around low-income housing and areas with majority African American residents. Bringing awareness to this issue gave residents more insight on how they are most impacted, organizers said.

“I think that we will have to move to renewable energy… It’s inevitable, doing it earlier is better for a number of reasons, as well as allowing one of the most polluted cities like New Orleans, to actually set an example. It’s kinda cool,” said Angie Torres, a Field Organizer with Audubon Louisiana.

New Orleans is number two in the nation for the cost of utilities paid by low-income households. Analysis conducted on the proposed cost statement of the Energy Coalition Proposal brought residents to the attention that energy bills will become cheaper with renewable changes and could also bring in a new job for renewable installation, maintenance, and services.

“I think it’s getting harder and harder to ignore the effects that climate change is having on the planet, for example the frequency of tropical storms. I as well think that money talks, so the fact that Renewable Energy Technology is getting cheaper, is very helpful,” Torres said to address what it would take for residents and not just the private sector to adopt a renewable approach and to start thinking about how humans impact their environment.

By Pastor Jamaal Weathersby New Hope Baptist Church The health of a community is often about connecting. Connecting with our neighbors, friends,
X
About LA Data News 1616 Articles
Lighting The Road To The Future
Website