New Orleans is home to a vibrant population of Garifunas, which numbers around a total of 50,000 living in cities across the United States. The Afro-Latino community distinguishes itself with yearly traditions like the Annual Misa Garifuna or Garifuna Mass that took place on Nov. 3rd this year at the Blessed Francis Xavier Seelos Church. These traditions are important more than a decade after Hurricane Katrina that displaced many of its community because it brings them together through celebration.

“I take pride in my culture and I’m always creating from it. As a Garifuna woman, I share my culture with love. It’s in everything I do: my art, my cooking, everything,” said Reina David, a long-time New Orleans resident, artist, author, and member of the City’s Garifuna Community.

Afro-Caribbean Garifuna Culture combines Caribbean fishing and farming traditions with a mixture of Latin American and African music, dance, and spirituality. These influences have helped to create a unique blend of food, music, religion, and customs still celebrated in New Orleans. Garifunas originated with the arrival of West African slaves who washed ashore on the Caribbean Island of St. Vincent around 1635 and eventually settled in four Central American countries: Honduras, Guatemala, Belize, and Nicaragua. Due to trade between New Orleans and Central America, Garifunas migrated to New Orleans around the 1960s.

“Afro-Latin Caribbean Culture is very rich, but you also realize how spiritual it is,” said Susan Spillman, an Associate Professor of French at Xavier University, who organized a showcase of Garifuna Culture on Oct. 28th at the campus.

As a young girl, David and her family moved to the United States from Santa Fe, in Colon, Honduras, where the largest population of Garifunas reside. During this time, dark-skinned Afro-Honduran people were easily confused for African Americans when they arrived in the U.S. David recalled she was often punished for speaking Spanish in school.

“I was not allowed to speak in my first language which made learning English a little easier. I did not want to erase my Garifuna identity, so I was punished for being who I am in school,” David said.

That didn’t intimidate her despite the harsh words. “I always had that little fire and discrimination throughout my life even far back in Honduras,” David said.

In the Latino Community, there is hostility, intolerance, and discrimination against Black people due to a long history of racism and colorism, according to David. Unfortunately, blackness is often demonized and deemed inferior.

“There’s always discrimination, especially among children. My mother when she had her first child, who is very light-skinned and my mother is dark-skinned, she was often accused of possibly kidnapping [her],” David said.

Afro-Latinos today are pushing back against centuries of colorism within their communities. Carmen Cosme, an Assistant Professor of Spanish and Afro-Latin American and Caribbean studies at Xavier identifies herself as an Afro-Dominican woman and studies experiences of Afro-Latinos. She encouraged the community to embrace both identity and ethnicity.

“Being here in this room is a privilege. Because once you go outside as a professional, as an artist, as a professor, as students of the world you face some difficult situations and we have to teach you that because of who you are,” Cosme said.

Despite the challenges she faces, David said she is proud to be a Garifuna woman. Celebrating the community’s rich heritage is part of keeping the culture alive.

“The Black experience that Afro-descendants experience is almost the same everywhere in the world. There’s always that struggle to be counted,” David said. 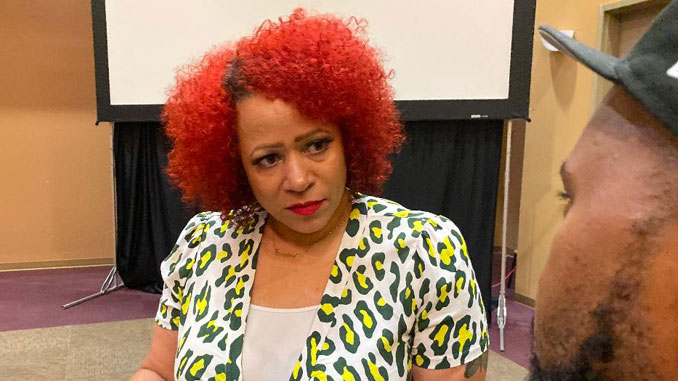