Havana, Cuba – Miles away from the aroma of creole cooking, oaks draped with Mardi Gras beads, and the sweet sound of jazz music, in a small corner of Old Havana, Cuba, the spirit of New Orleans shows up in the work of Daniela Ochoa, 23.

In an alley studio one block from the historic Plaza de la Catedral, the paintings of classic American cars mix with impressionist and surrealist depictions of Cuban life. This is the work of Ochoa, an Afro-Latina artist, born and raised in the center of Havana. But it’s hard to miss Ochoa’s images of black figures with bright gold trumpets and saxophones that light up the place. It’s jazz music.

“New Orleans is very close to the Caribbean, and we all love the music and the bright colors,” Ochoa said. When tourists from New Orleans visit her studio, they fall in love with the way the soul of the city is captured in Ochoa’s paintings. This is how she builds her clientele.

“They are very kind, very friendly to us,” Ochoa said. When she thinks of New Orleans, she thinks of the music and the people. She believes that both Cuban culture and New Orleans culture have similarities, like the carefree way of living and the joyful atmosphere. These cultural influences are what inspire Ochoa’s creative work.

“I’ve been painting since I was five,” Ochoa said. In fact, it was her father Danilo Ochoa who passed his talent for art on to his daughter. He started by giving Daniela paper and telling her to create whatever she liked. As her skills matured, her father began giving her his unfinished paintings to complete. This is how her career got started. However, Ochoa was unsure about pursuing her artistry. She took a break and studied social work like her mother.

“I didn’t like the work because it was complicated,” Ochoa said about social work in Cuba. After working for a couple of years, she went back to painting. She rented a space in Old Havana, while still studying psychology. 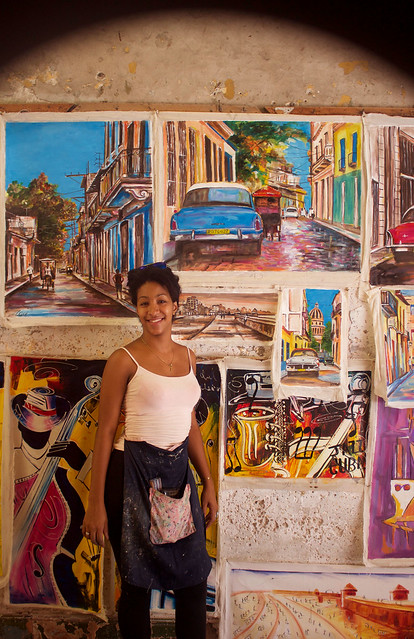 “I love psychology, because you have to apply psychology to all parts of society and for paintings especially, you know,” Ochoa said.

When she first decided to make a career out of painting, she said her mother did not fully understand the importance of her art. However, after seeing onlookers’ reactions to Ochoa’s work, her mother is now more supportive.

And so are her most loyal friends.

“I love it. I love her paintings and I love her dedication she has to paint,” Selena Hernandez, a friend of Ochoa, said in Spanish as she gazed around the studio. Ochoa believes that if she loves what she paints, then others will too.

“When I paint I feel free,” Ochoa said. And like the colors in so many of her paintings, Ochoa’s future is also bright.

“She has already been invited to other countries and she still hasn’t been one year painting,” Elisabeth Saenz, the studio’s owner, said in Spanish.

“I do not see myself in Cuba in five years,” Ochoa said. “I want to be in the Louvre.” She dreams of having her art show up in galleries all over the world. But no matter where she goes, she will always paint with Cuba, her home, in mind.