On June 20, 2021, two processions hosted by different second line organizations marked the City’s emergence from the COVID-19 quarantine. The Perfect Gentlemen Social & Pleasure Club hosted the first second line parade permitted by the city since its moratorium in March 2020. It was a humble but joyous affair. The Perfect Gentlemen, in white T-shirts, pants and baseball caps, carried canes wrapped in white tape. The TBC (To Be Continued Brass Band) led a crowd that grew in size over the course of a short, one-hour route. Many regular second liners went toe-to-toe with club members and musicians in energetic exchanges of music and dance. Encouraging circles surrounded young people who tried out new footwork skills. The intergenerational space of the second line resumed as if it had never stopped.

Perhaps that’s because it never did. Despite the City’s refusal to grant second line permits for the past fifteen months, social aid and pleasure clubs have sustained their culture in all the ways possible under gradually lifting restrictions: hosting dances, coronation ceremonies, picnics, and, once venues began to open again, attending brass band gigs. 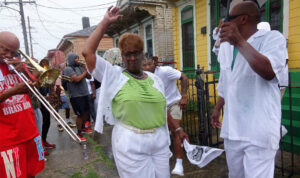 One of those clubs was the Original Big Seven Social Aid and Pleasure Club, who held a party, within gathering guidelines, on their regular Mother’s Day parade date. On Sunday, they also led a crowd of people to dance through the streets accompanied by the Young Fellaz Brass Band. Their “Stop the Violence March” responded to a less celebratory aspect of the City’s return to “normal:” a spike in violent crime. Big Seven members and supporters carried anti-violence signs while step-touching to the brass band’s beats. Drivers honked and waved. Neighbors danced onto their porches. As the band passed an assisted living home, one elderly resident made her way to the sidewalk, leaned onto her walker, and grooved with a huge smile on her face.

The route, which bordered Dillard University, was not what the Big Seven originally intended. President Edward Bucker wanted to begin at Columbia Parc (former St. Bernard Public Housing Project), where he might reach young people affected by systemic violence (also the site of the club’s founding). However, he said, the New Orleans Police Department required him to dramatically shorten the route which eliminated Columbia Parc. Despite complying with the City’s permitting processes, NOPD officers never arrived. After waiting for 30 minutes, Bucker decided to proceed without escorts. At the time of writing, he has yet to receive word from NOPD about their absence.

The march reflected the Big Seven’s public stance against gun violence. Following a shooting that halted their 2013 Mother’s Day second line, Bucker issued a statement: “Crime and violence in New Orleans is a systemic problem and we strongly believe that safeguarding our cultural heritage helps to address the roots of violence. We are a cross-generational organization, ages 5-70. Our young people grow up in this culture, are fed by it, and feel loved, supported, and connected in ways that build real security. That’s crime prevention.”

Both events on Sunday showcased the power of cross-generational nourishment, love, support, and connection that is so needed as the City emerges from the grip of COVID-19. They also demonstrated Buckner’s insistence that the second line culture “was never meant to be governed by the City.” Yes, city-issued permits have returned, but that is not perhaps the most significant benchmark in the second line culture’s path through the Pandemic’s hardships.