Reinvesting in “We the People”
Today the nation is at a crossroads in its experiment with Democracy. It is a time when the phrase “We the People” that appears in the preamble to the United States Constitution is a question of what people are to have justice, freedom, and equality? It is a time in 2020; where the vision of a nation is blurred and needs clarity of vision that can move it to a place that restores and renews its commitment to becoming a more perfect union.

Data News Weekly spoke with Marc Morial, President and CEO of the National Urban League, who is also the former Mayor of New Orleans and author. Throughout his life he’s been committed to social change and we had a unique opportunity to have a conversation about the NUL State of Black America and a host of other issues impacting Black America.

Unmasked: Taking Off the Veil of Racial Disparities in America
On this day Morial is upbeat, motivated and seems ready to lace up the gloves and fight justice for all people. He begins by speaking on the National Urban League’s State of Black America 2020. 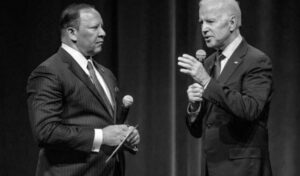 “We titled this year’s report “Unmasked” because the events that have unfolded this year have laid bare the face of racism in America. The pandemic has sickened and killed Black Americans at far higher rates because of long-standing racial disparities and biases in the Health Care System. The economic collapse has hit Black Americans hardest because of long-standing disparities in employment and income. The death of George Floyd shone a revealing spotlight on disparities in the justice system. We are in the midst of a triple pandemic, all interconnected by racism.”

It must be noted that conversations around combating the problem of systemic racism is reverberating across the nation; in this Presidential Election year It’s an important issue to Morial, who says that while the problems around racial disparities is nothing new, it is time to explore sustainable solutions.

To quote from the essay contributed by Dr. Lisa Cooper, Director of the Johns Hopkins Center for Health Equity: “As we have seen through the Black Lives Matter Protests, many people are finally recognizing the inequities that are borne out of systemic racism, becoming motivated to speak and act for justice and change. We know now, more than ever, that everyone’s voice is important to bring about the change that we seek. The crises of the COVID-19 Pandemic and police violence and killings of African Americans are forcing us to confront the injustices and eliminate the inequities that prevent us from living up to our stated ideals of “liberty and justice for all.”

20/20 Vision…The Struggle Continues
After the Killing of George Floyd, at the hands of police in Minnesota, protests are taking place in cities in America and abroad. It seems that the seeds of a new Civil Rights Movement have spawned in what is being called the Black Lives Matter Movement. Morial as head of the National Urban League and being part of many coalitions over the years dedicated to Civil Rights. Most recently, he and other Civil Rights leaders took part in working with the Congressional Black Caucus leadership and members of Congress on the George Floyd Justice in Policing Act and Morial and the National Urban League is co-convening the Census Roundtable, with Fraternal, Business, Civic and the Faith Community around the 2020 Census and getting Blacks to participate in the 2020 Census.

“It’s truly inspiring and gives us a sense of renewed hope, but we have to focus on turning protest into power, on channeling this energy and passion into action and bringing about transformational, systemic changes,” Morial says with enthusiasm and hopeful optimism around dealing with issues of social justice.

Election 2020…Black Votes Matter
This nation is only a few months away from deciding who will be the next President of the United States and it is in these uncertain times that all communities especially minority communities get out and vote. For as we are witnessing remnants of the nations’ racist past and a return to many Jim Crow-like practices aimed at keeping Black People away from the polls. Morial and the Urban League are part of a concerted effort to thwart these voter suppression efforts. He also lays out the case of why Blacks should vote in high numbers, not just in November, but all elections because Black Votes Matter.

“Black people should vote as if their lives depend upon it because they do. For all of the reasons that are laid out in this report, the triple pandemics of virus, economic collapse and racial injustice have pushed Black Americans to the breaking point. The historic gains of the last 50 years – voting rights, fair housing, equity in education – are steadily being eroded. Only voting in record numbers can keep our country from moving backward.”

A Lesson for Leaders: Building a Gumbo Coalition and Reducing Crime and Gun Violence
We are seeing a spike in gun violence in cities across America, including New Orleans. Morial, when Mayor of New Orleans led an effort overseeing a time where crime was reduced by over half. Recently, he released a book entitled “The Gumbo Coalition: 10 Leadership Lessons That Help You Inspire, Unite and Achieve.”

When asked what he would say to mayors and leaders across the nation on strategies to reduce violent crime.
“As Mayor of New Orleans, I oversaw a 60% reduction in violent crime which we achieved through a combination of reforms that helped to restoring trust between the police department and the community and investing in economic initiatives like summer jobs for youth. We also need a comprehensive National Gun Safety Policy.”

Good Trouble and Building A More Perfect Union
The fight for this nation to reconcile itself around issues of race is still ongoing. A nation where “We the People” relegated some to 3/5th a person and Jim Crow are now still fighting the good fight and as the latest Civil Rights Icon John Lewis said getting in “Good Trouble.”

Black Lives Matter is the latest incarnation of the demands for Freedom, Justice and Equality made for Blacks in America. And this long stride towards freedom is a relay, which the National Urban League and other historical Civil Rights groups continue to fight, so that Lady Liberty’s Light shines on all the people of this nation that strives to become a more perfect union.

Morial believes today’s Civil Rights Struggle is not just about how it impacts the African American community but affects the entire nation. One that many came on different ships but are now in the same boat. Where its citizens while either sail to an oasis of human decency where all can live with dignity or sink into the abyss of intolerance and incivility.

“The events of the last few months have placed our mission front and center and clarified that we cannot hope to move forward as a nation unless we commit to tackling racial justice. We are proceeding with the understanding that Civil Rights are not just a concern for communities of color, but for the entire community.”

Has Black Friday Lost its Luster? Depends on Whom You Ask