Rethinking “We The People”

America is at a crossroads, trying to decipher what it will be in the 21st Century. It is a country with a history that in respect to race often finds itself falling short of the creed that “All People Are Created and most importantly treated Equal.” And on the eve of this year’s 4th of July, we are seeing a revolution happening that’s testing where we are in our experiment with democracy.

The killing of George Floyd by the hands of police has set off a firestorm of protests about the value of Black life in America. It is in this time of transformation that we are reminded that this is a nation that continues to grapple with the stain of systemic racism. We are also reminded that those whose ebony hands helped build this country were once deemed as 3/5’s of a person and had no rights that Whites were bound to respect.

Fast forward to today. There is a worldwide crescendo of voices in unison demanding recognition, rights and respect for Black lives and are echoing the cry that “Black Lives Matter,” and Black lives have the same value as White lives.

It is in with this backdrop that today people are in the streets demanding not only justice for George Floyd, but for the heinous acts perpetrated against Blacks by the hands of those in law enforcement or those who decide to take the law into their own hands and become police, judge, jury and executioner, hunting down Blacks.

And this is nothing new to the Black Experience — from lynch mobs, to White terrorist groups such as the Ku Klux Klan, to the killing of Emmitt Till and so many others. But today in the age of cell phones, anyone can broadcast “reality” as it is happening. Today decent people of all races can now see what before were the nameless, faceless, people who have suffered at the hands of police and witnessed the inhumanity of a society that sometimes believes that intolerance and marginalization to their darker brothers is not real. 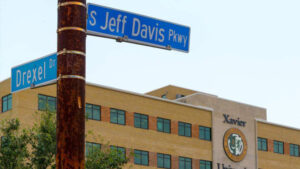 History vs. His Story

Today it is a struggle for the soul of a country that has to reconcile this history, and there are voices rising to re-write the history of a nation that has oftentimes created myths and propaganda cloaked in the guise of regional pride. This is what we see today as some are demanding the removal of Confederate statues, the changing of street names and a burgeoning movement beyond this dark point in our history.

Some wanted to hold onto this part of history, calling themselves patriots. But their “patriotism” could be translated into selective amnesia, because in truth they were fighting to preserve a way of life that kept their “knee on the neck” of Black Americans with polices that kept us bound as second class citizens.

For example, the removing of confederate monuments and the proposal of changing some of the street names in New Orleans is a step in the right direction. To change Jefferson Davis Parkway to Norman C. Francis is just the beginning of having streets that reflect where we want to go in our “Desire” to reach “Humanity” (which are also street names in our City).

Racism is a disease that has infected this nation for too long and caused it not to reach its full potential. I remember interviewing the great Chef Leah Chase, whose name is also being proposed to replace the street name of Confederate General Robert E. Lee. She said, “Imagine what this country would be without the barriers of segregation and racism.” I pondered this and thought about all the great people who are non-White males who were confined to the margins, never being able to play in the major leagues of life.

We have to ask what if after slavery ended there wasn’t segregation and Jim Crow after Reconstruction. And it was this age of “American Apartheid” where statues of traitors to the nation were resurrected and stood as symbols of racial repression and White domination. It is in this day that we have the opportunity to right the wrongs of the past and set a new course for this City, nation, and world as it reconsiders its past injustices.

To Change History is to Make History

Today it is encouraging to see the soldiers in this fight of different backgrounds shouting that “Black Lives Matter” and standing shoulder to shoulder with their fellow human beings. But in this flashpoint in time it is important to note: what does a win look like? It means staying civically engaged; it means getting to the polls and voting; it means more young people deciding to run for public offices and letting their hands shape the world they desire. Also, it means resetting the table of power where more voices are heard. This is what is happening today.

Racism and intolerance are diseases that are curable, and we have the capacity to change and move in a new direction. We as a City, nation and world can choose decency, compassion, love, inclusion, and respect for all people’s humanity. These choices, while not easy for everyone, would put us on “The Right Side of History.”