After having me, my mother began working night shifts as a Letter Sorting Machine Operator at the New Orleans Main Post Office. She worked her way up the ranks to enjoy a successful career until her retirement after 27 years. 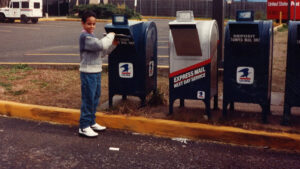 Personal stories aside, the current attack on the U.S. Postal Service poses devastating threats not only to our upcoming elections, but to our way of life. Seniors depend on it for medicine. Small businesses rely on it to reach customers. It is a lifeline for rural communities.

For my family, and so many other families across America, it is a symbol of security and advancement. For the Postal workforce, it symbolizes pride and a commitment to service. It is also a symbol that transcends party politics.

Now, more than ever, we must protect and preserve the integrity of institutions like the United States Postal Service.

State Representative Royce Duplessis as a 4th grader where he did a social studies project on the United States Postal Service. It was called, “The Life of a Letter.” In this time where it has become a flashpoint in this election he advocates for its importance and investment in more resources for the U.S. Postal Service.

One of the photos is his head shot to be used on top of article.