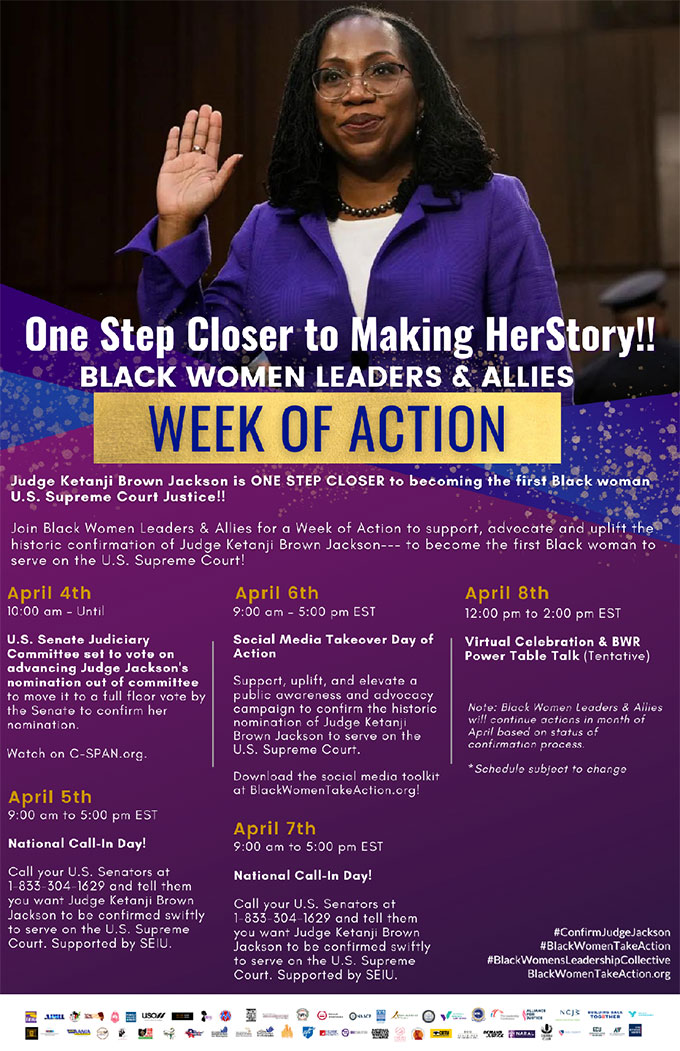 Washington, D.C. — On Monday, April 4th, 2022, Melanie L. Campbell, President & CEO of the National Coalition on Black Civic Participation (NCBCP) and Convener of the Black Women’s Roundtable (BWR) issued the following statement after the Senate Judiciary committee voted to advance Judge Ketanji Brown Jackson’s Nomination to a full floor vote in the U.S. Senate to serve as the next U. S. Supreme Court Justice.

“As a Black woman, I could not be more proud and thankful to see how Judge Ketanji Brown Jackson persevered through this confirmation process. Her grace, confidence and mastery of the law demonstrated that she is more than qualified to serve on this nation’s highest court. I, along with millions of Black women and our allies will continue to have her back as she is set to make history this week by becoming the first Black woman to serve on the U. S. Supreme Court. Further, today, as we observe the 54th Anniversary of Rev. Dr. Martin Luther King’s Assassination, this vote is a part of the culmination of Dr. King’s Legacy fighting for justice for all people in our nation.”

Advisory: In the lead-up to Judge Jackson’s final confirmation, The Black Women’s Roundtable will continue its series of activations, digital engagements, and advocacy under the banner of our Black Women & Allies Coalition. Please refer to the attached flier for the list of events and advocacy taking place between April 4th – April 8th in support of Judge Ketanji Brown Jackson’s confirmation.

The National Coalition on Black Civic Participation (NCBCP) is one of the most active Civil Rights and Social Justice Organizations in the nation “dedicated to increasing civic engagement, economic and voter empowerment in Black America.” The Black Women’s Roundtable (BWR) is the women and girl’s empowerment arm of the NCBCP. At the forefront of championing just and equitable public policy on behalf of Black women, BWR promotes their health and wellness, economic security & prosperity, education, and global empowerment as key elements for success.