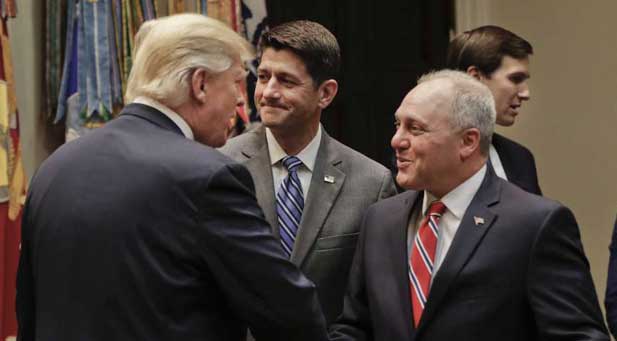 Polarized America
Recently, we watched with horror as a lone gunman James Hodgkinson decided he would take his problems with the political divide in America into his own hands. Shooting several people on a baseball field as members of the Republican Congressional Baseball Team were practicing for their annual baseball game with proceeds benefitting charity; and as they prepared for this day of bi-partisan unity shots rang out striking five people including Louisiana Congressman and House Majority Whip Steve Scalise. This tragedy led many to reconsider this age of unbridled contentious rhetoric gone too far. And has the political polarization that we see played out in the traditional and new media daily manifested itself into something that threatens civil society and the future of our republic.

A Call for Unity
After the shooting, many elected leaders put aside the partisan bickering that has begun to characterize our recent political environment. With President Trump in the spirit of unity saying in his prepared remarks, “We are stronger when we are together, we are better when we work for a common good.” Also, New Orleans Mayor Mitch Landrieu, who has been on the national stage as of late because of him leading the way in the removal of four Confederate Monuments stated in a speech surrounding the shooting, “Unfortunately we have been here before in our country,” Landrieu said, “But this is no less shocking. We all have to be clear as we stand in unity together that an attack on any public official, any staff member, any first responder, is an attack on our very democracy and on all Americans.”

The Changing Role of Media in our Democracy
As we look into our brave new world where the traditional media is sometimes more part of an infotainment business model where they must sacrifice educating and informing the public in a race to the bottom to pull in the audience share. Additionally, on social media, while it provides a space for any and all to create content; we must ask ourselves is this good for the future of society? Is this something that can foster civil discourse or are a combination of all these factors leading to the demise of the citizenry being able to talk through differences as it relates to issues and those that lead our public elected officials to create sound public policies?

Shedrick Roy is an Activist in New Orleans, who uses social media to spread many of his views on the issues of the day. He thinks it is a useful tool and empowers people to have discussions around important issues. “I feel social media when it is used for good can inform the public, and when people are listening to points of view that are not their own and trying to find solutions; talking to another and not at each other. Although this is not always the case, but to have the opportunity to speak to fellow citizens about issues and also its use to mobilize, organize and educate people is a good thing.”

But as this rings a bell of truth, there is a downside to this information democracy. It is one where many can get an unhealthy diet of information that reinforces personal and political bias. Hal Clark, a playwright and host of local public affairs radio program on WYLD FM98 Sunday Journal, states of this phenomenon and calls for the traditional media to act more responsibly, “I think it is the traditional media’s job to report the facts, unfortunately, that just doesn’t happen. Now many of these media companies are starting to placate to a targeted audience whether it is liberal or conservative. However, today I don’t know if people are paying the same amount of attention to the general media as they have in the past because of the different choices as it relates to getting information via the internet, social media etc. And while this is a good thing they have choices, the downside of it is that many times people are now only paying attention to only the news they agree with.”

Trumpism: Political Discourse in the Age of the Divider-in-Chief
The question for us as a society is how we deal with an information democracy where disagreements of opinions do not turn into caricaturing or demonizing opposing viewpoints. With the byproduct of this being acts of extremism, such as the shooting of Steve Scalise and several other innocent people. Something that is being fueled by what some are calling the divider-in-chief that is President Trump. Since his emergence on the political stage it can be reasonably argued that some of his rhetoric is irresponsible and beneath what is appropriate for someone occupying the highest office in the land. And while in the aftermath of the shooting he made a call for unity; it is his divisive words that help widen the political divide in America. One who points out this fact is Louisiana Congressman and Chair of the Congressional Black Caucus Cedric Richmond. In a speech following the shooting he stated of the shaping of political discourse, “I think it all starts at the top, to tell you the truth Elections have consequences, but, too, words have real consequences. And the political climate, as far as my lifetime, and I’m not that old, it’s the worst I’ve seen it.”

This political divide is of great concern for those who desire to have a productive discourse that leads to sound and responsible public policy. Louisiana State Senator Wesley Bishop says he is concerned about how polarized things are and feels this is the worse it’s ever been since he’s been an elected official, “When we see somebody by their rhetoric acting like they want to turn back the hands of all the progress we have fought for this is problem. When we hear things such as Make America Great Again, I have to ask when were we not great or what’s stopping us from being great right now? And Trump is saying this on the heels of the first Black president and he is saying things that should not be said in the outhouse much less as the White House. This type of mean spiritedness and partisanship and atmosphere where some are acting on their impulses does not lend itself to good public policy that help those most in need. And that is what I’ve tried to do is respectfully disagree with my colleagues and sometimes compromise to get things done because that’s what people elected us to do.”

Democracy in the 21st Century
Today questions about how to be civically engaged in the 21st Century is one we must answer. And it can be argued that citizens have more opportunities to be informed than at any time in human history. But with expanded access to information it may perhaps be necessary to revisit what it means to be literate and informed in the 21st Century; and how in this Brave New World we think about this if we are to live in a civil society. Shedrick Roy feels it is important to not only speak about issues online, but for people to get involved to help find solutions to the problems that plague many communities. Speaking of the citizen’s responsibility in making elected officials more accountable he says, “It is because of our apathy our elected officials can do what they want which in some cases is nothing at all because we are not participating in the political process. We are voting at a 25-30% rate here in New Orleans. We have to get involved; we can’t get disenchanted because we are suffering.”

Theresa Butler is a graduate student studying Library Science and works in a University Library, she feels the expanded landscape of information and access is good, but believes this must be married with more organic forms of civil engagement if things are to get done to better society. “It’s good that a lot of people use social media to discuss their political views, but we as a society shouldn’t rely 100% on social media. Being physically active in political engagements is key.”

Coming Together and the Search for Truth
While America has been throughout its history a nation founded on the premise and promises of equality, freedom and liberty this has not been the reality. In fact, we still struggle today with how to become a more perfect union. But the one thing that’s helped us moving in that direction is the freedom to express ourselves as guaranteed by the first amendment. Today, we have this right more than at any time to express ourselves, but we must begin to talk to each other and not at each other if we are to survive as a nation. That we must not resort to extremism and succumb to the worst of our nature by demonizing those whose views are different then our own; and in this landscape where in the highest office in the land we have someone who is fanning the flames of this division for political gain this is not only irresponsible but dangerous and threatens the future of our nation and place on the global stage.

Hal Clark speaks of this and says that collectively and individually we must be more vigilant in being informed if we are to survive as a nation of laws and one where civility trumps division. “I feel Donald Trump is taking advantage of those who aren’t going past his tweets. He says something is fake and there are a lot of people who would not seek out source. He is taking advantage of this polarization, he knows there are people who will take what he says as gospel and will not go and find out anything for themselves. But I feel the solution lies in the individual, they should not just take anybody’s word as gospel. Go pass the 140 characters or skimming of articles, we have to do just a little more work on our own to get to some semblance of truth and that would benefit our community and society as a whole.”