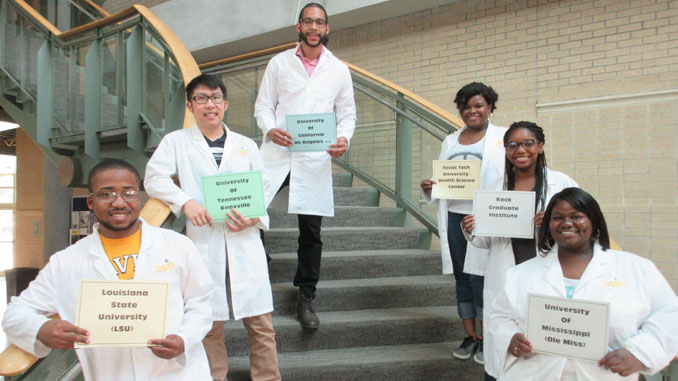 NEW ORLEANS – Xavier University of Louisiana received a $16.8 million Grant Renewal from the National Institutes of Health (NIH) as part of the National Building Infrastructure Leading to Diversity (BUILD) Initiative. The second phase of the grant, Project Pathways II, will allow Xavier to focus on the most effective aspects of the already thriving Biomedical Program that this Historically Black University offers its students, work to institutionalize these initiatives, and disseminate these best practices across the country.

“We are proud that the NIH has named us, once again, as one of the institutions that it believes can uniquely contribute to increasing diversity in biomedical fields,” said Dr. Reynold Verret, President of Xavier University. “Xavier is already a national leader in producing African American graduates who go on to earn terminal degrees, however, with this grant, we plan not only to increase the number of our graduates who enter and complete graduate studies in biomedical sciences but to also identify and map initiatives which can be disseminated to other institutions of higher education in order to increase the number of African American Biomedical Scientists nationally.”

The Project Pathways II Award is one of only ten across the country forming the Diversity Program Consortium BUILD Initiative, an approximately $200 million NIH investment that seeks to continue to develop new approaches to engage student researchers, especially those from underrepresented backgrounds, and prepare them to thrive in the biomedical workforce. Xavier and fellow awardees will continue to train, mentor and encourage students from underrepresented groups to enter into and stay in biomedical research careers.

“The BUILD Funding from the NIH has provided us with a great opportunity. This grant has provided resources to implement initiatives, which are assisting us in doing what we do best, preparing Xavier students for successfully entering and completing graduate and professional programs,” stated Dr. Maryam Foroozesh, Xavier’s BUILD Program Lead Principal Investigator.

Xavier University: A Record of Excellence:
#1 in the nation in the number of African American graduates who go on to complete medical school (AAMC data 2019).
Among the nation’s top four colleges of pharmacy in graduating African Americans with Doctor of Pharmacy (Pharm D) degrees.
(2018)

#1 in the nation in awarding bachelor’s degrees to African American students in the biological and biomedical sciences, the physical sciences, and physics. (2018)