“I am my most comfortable self when I’m being a character,” says Pharrell in his cover story for GQ’s “The New Masculinity” issue, where the producer-entertainer-designer dons what this writer immediately characterized as “dorm room comforter chic”…albeit in a cloak from the collaboration between luxury outerwear brand Moncler and Valentino designer Pierpaolo Piccioli.

“When I saw the look, I didn’t question it. I still don’t know if it’s unisex or not. All I knew was, it’s going to look amazing, and I think that’s the new masculinity. Having the willingness to just be. Just live and let live,” Pharrell told GQ. “I mean, how f—–g insecure must you be, as a human being, that because you are uncomfortable with doing something, somebody else shouldn’t be able to do it? I don’t accept that. That’s unacceptable to me.” 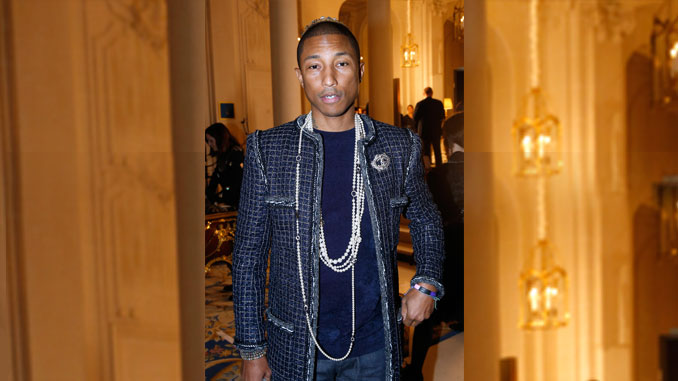 As not only a platinum-selling, award-winning producer and artist, but the first celebrity to collaborate on a collection with Chanel, Pharrell—like Kanye and Rihanna—has helped propel the next wave of the already existing bridge between hip-hop and luxury fashion. And as a Gen X-er who affectionately calls Jay-Z and Sean Combs his “big brothers” and has weathered the “rapey” backlash (and copyright lawsuit from Marvin Gaye’s estate) sparked by “Blurred Lines,” his collaboration with Robin Thicke, Pharrell has also been at the uncomfortable cusp of evolution when it comes to the #MeToo and #TimesUp movements.

“Some of my old songs, I would never write or sing today. I get embarrassed by some of that stuff. It just took a lot of time and growth to get to that place…I think ‘Blurred Lines’ opened me up,” he said (though we did hear Pharrell perform a portion of “Blurred Lines” during this year’s Essence Fest). “I realized that there are men who use that same language when taking advantage of a woman, and it doesn’t matter that that’s not my behavior. Or the way I think about things. It just matters how it affects women.”
Pharrell also expressed concern for how a binary world continues to affect non-binary identities and psyches.

“What is happening to a transgender person? What are they going through? They feel like their body is not connected to their spirit. And what kind of toxic environment do we live in that they have to justify how they feel? That must feel incredibly insane. That is spiritual warfare. So I wanted to be in the conversation. On the surface, it is an older-straight-white-male world. But it has prompted this conversation that I think is deeper than what the new masculinity is or what a non-gender-binary world looks like. I think we’re in spiritual warfare.

“Well, when it comes to having this conversation, I don’t necessarily know that the masculinity is new as much as the conversation is new,” he later added. “That’s number one. But I think this is a way that I can speak up at a time where we’re in the middle of a spiritual plight. A spiritual war.”

That said, while Pharrell believes in freedom for all, he tells GQ his personal expressions still have distinct boundaries.
“I do have my lines. Like, I can’t wear no skirt. Nor am I interested in wearing a blouse. That’s not my deal. But things that are made for women that I feel will look good on me—that I like—I will wear,” he says. “I can just say, for me, the minute that I stopped worrying about what other people thought, and stopped catering to the fears that are taught to you—the minute that I let all that shit go—that’s when I started, like Oh, that Chanel belt? I could wear that. That Chanel hat? I like it. I could pull that off…When you listen to yourself and you’re comfortable in who you are, you wear what you feel like fits and looks right on you. And that’s it.”