Growing by leaps and bounds, I AM ATHLETE is in its second season. Other former NFL standouts—Chad “Ochocinco” Johnson, Channing Crowder and Fred Taylor— join Marshall for every episode. The set stays lit and the topics jump from sports and politics to relationships, money, mental health and beyond.

Like-minded but contrasting personalities set the crew apart from any other podcast. It’s off-the-cuff and in-your-face with absolutely no holding back.

Marshall’s other passion is his House of Athlete empire, which focuses on athletes’ mental and physical fitness, diet, nutrition and lifestyle habits.

Like and subscribe to the I AM ATHLETE Podcast channel and be on the lookout for new episodes every Monday. 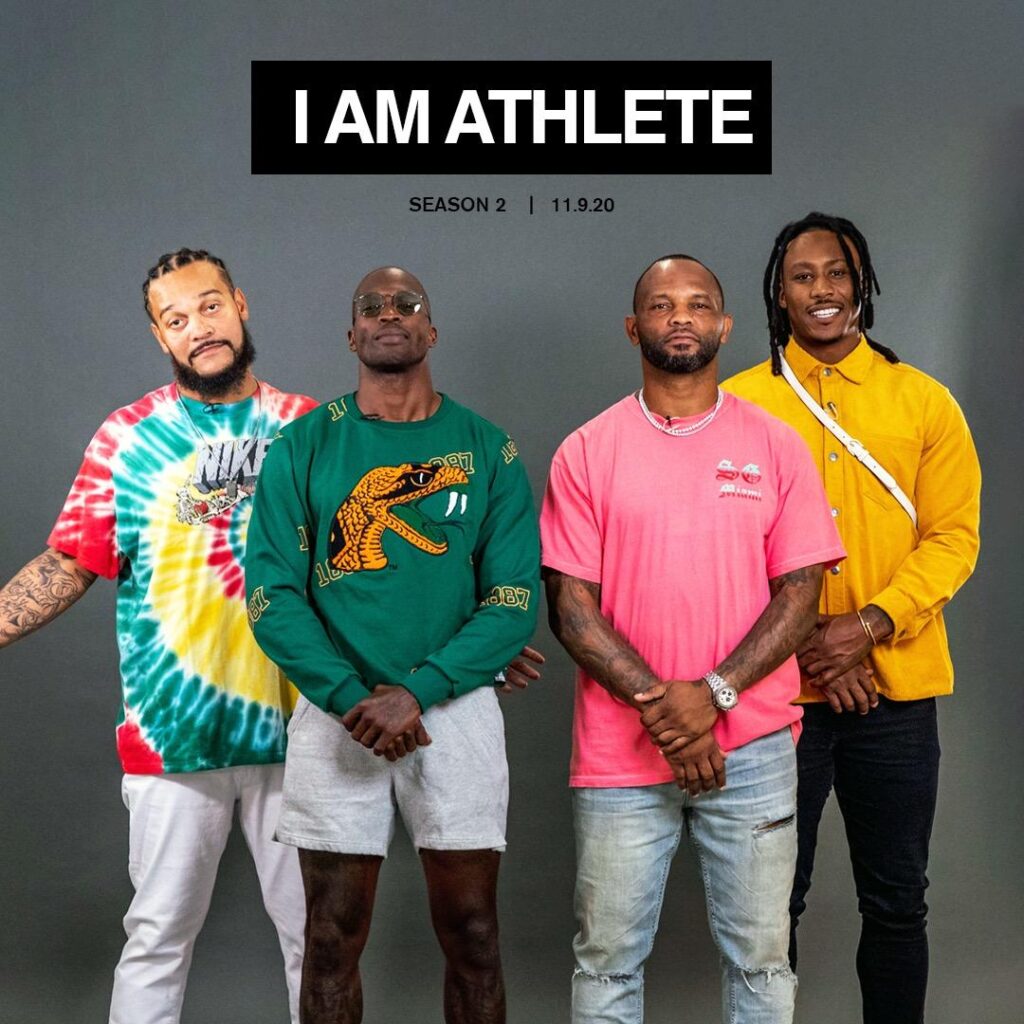 Brandon Marshall: I’m great. How are you?

Marshall: Awesome. Awesome. I enjoyed my time when I was down there [New Orleans]. Y’all know how to take care of people down there.

Zenger: We were pulling for you to get on the field and for it to pan out. I hate it didn’t.

Marshall: Yeah man. So much love down there, bro’. Go into Walgreens or into a gas station and people were like, ‘When they gonna let you play?’

Zenger: I actually approached you and shook your hand in Vegas for Mayweather-Pacquiao. You were cool as hell.

Marshall: Okay, well you got me at a good time [laughing]. I’m just playing.

Zenger: I am an avid watcher of the I AM ATHLETE podcast. You guys are doing an amazing job, and Chef Nancie be doing her thing in that kitchen. You are into Season 2 now. Did you even expect this level of growth so fast?

Marshall: Yes, I did. But I didn’t know how hard it would be. I’m just one of those guys who tries to figure it out and find the answer. My thing is, if there is someone else that has done it before, why can’t I? Or why can’t we do it? That’s always been my mentality. Now, this is my first time doing this, obviously, so I didn’t know how popular it would be and how impactful I AM ATHLETE would be for our followers and viewers. That’s the most impressive thing, and shocking thing is people love tuning in. They participate in what we’re doing and give us amazing feedback. I think that’s the coolest thing so far with building I AM ATHLETE and having this opportunity to be a part of it.

Zenger: It feels like the timing for this type of podcast, one that is culturally appropriate and culturally responsible, I think the timing and topics have been perfect.

Zenger: You couldn’t have found three better personalities to match yours than Chad “Ochocinco” Johnson, Fred Taylor and crazy-ass Channing Crowder. What makes this group so special when behind that camera?

Marshall: I think you need guys that are going to be real. A lot of times when we tune into these major networks, people are really buttoned up and they are performing. What we set out to do is be real and give our real opinions, and whatever happens happens [laughing], good or bad, after that. Channing, I think what makes him unique is there are not too many people willing to go there, and he does it every single show. With Fred Taylor, it is his wisdom. He may get mad at me for saying this, but he’s like grandpa, the guy sitting on the porch in the rocking chair who you can always listen to his stories and you can learn something. Ocho brings this spark to the show where you never know what he’s going to say. His lifestyle, and the way he thinks and the way he approaches things, is really unique. You don’t get too many people that are the same way all the damn time. That’s Ocho. I think for me, I just try to play my part and make sure I’m giving good sound bites and leaving people with something that they can say, “You know what, I learned something.” I try to play that role of, what are we talking about today that’s going to change someone’s life?

Zenger: I think for you, B Marsh, it showed another side of you. I think there was this perception out there that you were this angry, unapproachable guy. You watch the podcast and you’re funny, you don’t have a problem laughing at yourself. It just shows a different side of you and I think that was very important.

Marshall: Yeah! When you look at the greatest and the best on television in front of the camera, you gotta be able to lean into that. Sometimes we take ourselves too serious as athletes, entertainers and people with influence. We’re just like everyone else, and that’s the way I approach it.

Zenger: We get so much news at the palm of our hands now, and social media makes it even more accessible. How do you come up with the topics to discuss show after show?

Marshall: Alicia [Zubikowski, his producer] and I will talk. We’re always talking and communicating about what’s going on in the world, in the culture, politics and business, and sports. So we look at those areas and we try to be a part of those conversations. But at the same time, we try to create the conversations. I think that’s what makes our show really good. You’ll come on the show and sometimes we’re in the discussion. We’re talking about the trends, but then you’ll also get us starting the conversation about finances and relationships and mental health. I think that’s what really makes our show unique. Alicia does a great job of just making sure that we’re just consistent in delivering great topics.

Zenger: One of my favorite episodes was the one about finances. The Mo’ Money Mo’ Problems episode. You spoke about the show being real. I was actually shocked how open and honest you guys were about your financial gains and mishaps. Not only could that serve a purpose for young athletes, but anyone in general could have learned a lesson during that episode.

Marshall: Yeah, 100 percent! It has to be that way. So many people would get up there and talk about, this is what you should do and here are the steps you should take. I just think we learn better from hearing people’s experiences and hearing how other people approached it. Using our stories to help others is why I think people are engaging with it at this level.

Zenger: Your passion for mental health stability came to life during the episode discussing Antonio Brown’s NFL return. You were very vocal during that episode. You played the same football position as Brown and you understand how important it is for him to seek help. How important was it for you to address Brown the person just as much as Brown the player?

Marshall: It’s everything. That’s my purpose. That’s literally why I’m here, to help bridge the gap in the mental health community. Use every platform that I have, whether it was when I was playing in the National Football League, or now through I AM ATHLETE, and Showtime and FS1. That’s why I wanted to be on these platforms, was to get those opportunities to just be real and organic. If you look at it, man, mental health affects all of us some way somehow. And if it’s not us it’s a loved one, which means it comes back around and affects us. We just need to have organic conversations about it because it is a taboo topic. We need to have these conversations every single day, whether it’s in our government, in our school systems, in our homes, our relationships. We gotta talk about mental health. We gotta talk about: Where is your mental fitness level today?

Zenger: I was impressed that you were encouraging people to not only focus on the major ballots, but the local ballots as well. The things you discuss, you can tell you do your due diligence, and it’s intriguing topics to you.

Marshall: Yeah, my experience, the first time I voted—I thought I was just going to vote for the president. I had no clue that there were other races. There were bills that I was voting on. I had no clue. And during this pandemic and during this time where racial tensions are soaring, everybody is saying, “Go vote, vote, vote,” and nobody was standing up and teaching people how to vote or the mechanics of voting. I just didn’t want people to go out there and vote for the first time and not be prepared. I still have a lot to learn. And I think this is a conversation that we will continue to have, more so on educating people on the mechanics and the process of voting, how to prepare to vote. There’s so much more to learn. Yeah, looks like Joe Biden is our president, a lot of people are happy about that, a lot of people are sad about that, but the job isn’t done. We still have work to do. Like you said, that’s at the local level and that’s where our power is. And there is a lot for me to learn, and I think through my journey of learning, and sharing that on the platform I AM ATHLETE, I think we will teach a lot of other people as well.

Zenger: The voting process can be intimidating, so I thought it was pretty cool for you guys to open up about your voting experience and be vulnerable enough to say, “I just started voting a year ago,” or two years ago.

Marshall: Yeah, it is intimidating. Again, there are a lot of people that are afraid to talk about politics and afraid to say “I don’t know,” so when you see Channing Crowder, myself or Ocho say, “You know what, I’m not strong in this area,” it gives other people the room to stand up and say the same thing, and maybe ask more questions.

Zenger: I cannot let you get out of here without talking about House of Athlete. Tell us about what you’re doing with that and what inspired it.

Marshall: I’m taking my 13 years of experience—so House of Athlete, I’m taking my 13 years of experience in the National Football League and I have fused it into this fitness concept. When I walked into the New York Jets facility, all the guesswork was taken out of it for me. And I was able to come in and optimize my performance, optimize my health in every single area. Whether that was around my food, whether it was around my supplements and how I train, my mindset, my body, everything was taken care of. I think there is a huge void in our industry. People are looking for a place to go, where everything is integrated, and all the guesswork is taken out of it. We can’t have the conversation around optimizing our health, when we’re not talking about food, we’re not talking about supplementation, we’re not talking about mental fitness, we’re not talking about training. It takes all of that to unlock ourselves and optimize our full potential no matter who you are or what you’re doing. We are just saying athletes are the healthiest people on the planet. Why don’t we train like them and adopt their lifestyle? And so far the response has been amazing with our athletes, and there’s big things ahead for us.

Zenger: B Marsh, it’s been a pleasure and an honor. Keep doing your thing, brother, and continue to make us proud. Is there anything else you want to add?

Marshall: No, that’s it, man. I see why you got your job. I’m happy to learn from you how to interview people. Great job!

The post From Pigskin to Podcaster: Brandon Marshall Keeps it Real on ‘I AM ATHLETE’ appeared first on Zenger News.