State and City officials cut the ribbon on November 5th on the City’s new $1.3 billion airport terminal, which opened to the public on November 6th. 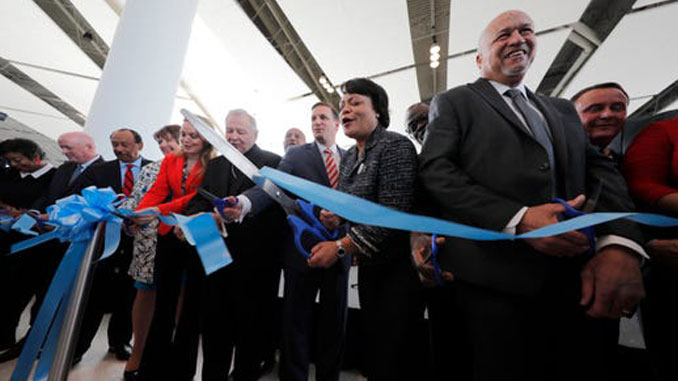 The new airport is much larger and modern than the old airport that was built in 1959. The 927,000-square-foot (86,100-square-meter) facility features music venues, three rooms for mothers to bring small children, and other amenities such as charging locations for electronic devices at 50 percent of the seats at the gates. There are also 8,000 available parking spaces.

The terminal opened this month after being slated to open in May of this year.

A number of New Orleans restaurants are featured at the new terminal, and the City’s Mayor, LaToya Cantrell, said local musicians will perform daily at the airport.

“You can come early and enjoy New Orleans right here in our terminal,” the mayor said at Tuesday’s ceremony.

The new airport should help attract even more people to the City that already attracts people from around the world.

The airport welcomed a record-breaking 13.1 million passengers in 2018, an airport spokeswoman said.

The City of New Orleans also hosted more than 18.5 million visitors in 2018, a 4.3 percent increase in visitors compared to 2017, according to a study commissioned by New Orleans & Company and the New Orleans Tourism Marketing Corporation.

One of the biggest improvements is that passengers traveling through the city-owned airport will actually get a real sample of New Orleans — one of the United States’ most distinctive and beloved cities.

Among the more than 40 post-security concessions, travelers can choose from classic beignets at Café du Monde, a drink at Bar Sazerac, creole food at Leah’s Kitchen, Angelo Brocato’s Ice Cream and live music at Heritage School of Music Wine Bar.

In addition, the city’s restaurants, bars, and cultural attractions stand to benefit from the modern new terminal.

This impact is echoed by National WWII Museum President & CEO Stephen J. Watson, who says the museum has welcomed nearly 8 million people since opening in 2000.

“The addition of a new, world-class airport will allow for even more visitation to the Greater Metropolitan Area and will also be a significant economic driver to businesses and cultural attractions that depend on corporate and family travel,” Watson remarked. “We’re thrilled to see the new MSY (the airport’s code) open.”

XULA.edu Dr. Joe M. Ricks, Professor of Sales and Marketing in Xavier’s Department of Business, was appointed to the New Orleans
X
About LA Data News 1476 Articles
Lighting The Road To The Future
Website