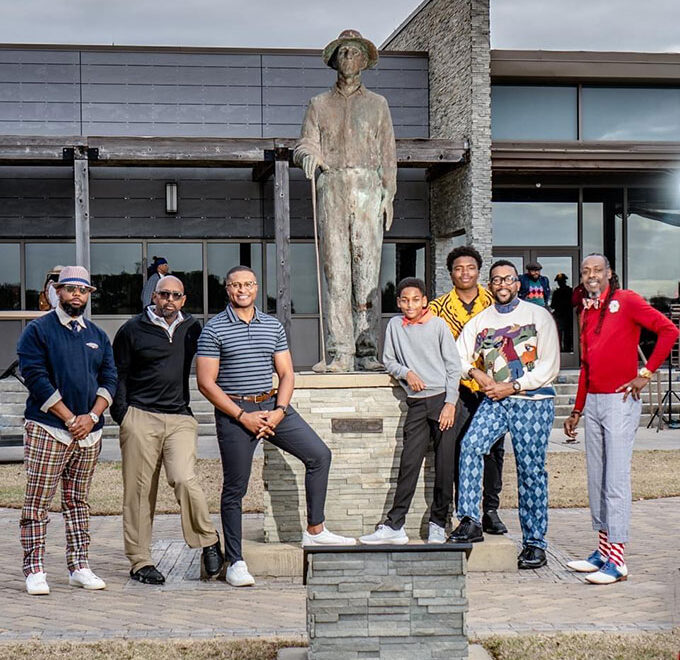 Inspire to Reach Higher
In a city where too often negative images of African American men are the norm, it is important to note that many are dedicated to pursuing excellence.

NOLA NOBLES is one such group. Every year founder Torrance Taylor brings together Black men and boys from across the city for his annual photo shoot. In its eighth year it honored Joseph M. Bartholomew, an African American architect who played and designed golf courses. The gathering took place in Pontchartrain Park, on the golf course named in his honor.

“This year’s theme was “Staying the Course” because we don’t want the great men who are contributing as such to our rich culture to give up. This year was heavy on inspiration,” says Taylor.

Changing the Narrative
As noted, some of the portrayals of African American males are negative, but according to Taylor, putting the spotlight on positive Black men, “It’s important that no matter the climate of the city we must still acknowledge the good that’s being done. The few good men must not get lost with the others.”

Blessed to Be a Blessing and Working Together
NOLA NOBLES have partnered with Blessed 26, who served as this year’s event sponsor. “I have been working with Torrance for several years now,” says Kendal Francis, Founder and Executive Director of Blessed 26, a program dedicated to uplifting young boys in New Orleans. “I wanted to show what we can do when we work together. There are many people doing great things in this city, and we are showing how we can make a positive impact and change the narrative as it relates to Black males in the City of New Orleans.”

Some consider what’s going on with the crime wave violence a major uphill battle and hopeless in some regard. But both of these men and others have shown that there are African American men who are working on solutions to the problems that plague young men and boys. “Our goal is to showcase Black men who can provide hope and inspiration to our community. All we need is more investment of resources to replicate the great work we are doing” says Taylor.

Investing in Black Male Excellence
Moreover, as we have just celebrated the MLK Holiday, we as a community must ask ourselves will we have a community that is healthy and functional, or will we have chaos? Today it is necessary that all sectors of the community commit to making New Orleans a better place for all to live and thrive. For this to occur, it is essential that African American males have the support and resources to succeed.

NOLA NOBLES is working towards this end, “Throughout the year we adopt a high school to help students with life skills. Our partnership with Blessed 26 has allowed students to build the capacity and expand their network that will contribute to them increasing their net worth later in life. We have to build bridges, so our Black males can see their value and work towards reaching their goals,” remarks Taylor.

“This is something we both feel passionately about, uplifting and giving our Black males the tools to be the best versions of themselves” says Francis.

Living Life for Yourself

Dionne Character Female Empowerment Columnist As we walk away from 2022 into a new year of splendor, leaving behind those who
X
About LA Data News 1611 Articles
Lighting The Road To The Future
Website