The Pandemic may have disrupted how children learn, but it has not stopped Dr. Calvin Mackie, the founder of STEM NOLA, now STEM Global Action. For the last 18 months, and thousands of views later, Mackie took his educational crusade virtual, to better help children embrace a love for science when many schools and after-school programs remained closed.

Most recently, he taught about the value of science through using the example of the Marvel Cinematic Universe’s Black Captain America, Sam Wilson, played by New Orleans native and Actor Anthony Mackie, who just happens to be his brother. He shared that his brother’s well-loved character had great lessons to provide a foundation to help children of color develop an interest in science, technology, engineering, and mathematics fields.

“Different people respond to different things,” Calvin Mackie said. “When you look at the work we do, we put out a lot of content because we’re trying to reach kids and their parents no matter where they should be,” said Mackie on STEM Global Action incorporating Marvel characters into their content.

His brother’s character gained global attention this summer after the Disney+ series The Falcon and the Winter Soldier finally revealed that character Sam Wilson will officially be the face of the Captain America image within the MCU.
“That is part of the communication strategy. Can we draw an analogy between something that the kids like and what we’re trying to get them to understand, [so] that we move them… towards something that can give themselves agency,” Calvin Mackie said.

Mackie said he wanted children to spot connections between this fictional Marvel world and STEM, especially in the character Captain America. Sam Wilson, the newest Captain America, is an African American Veteran that, contrary to his predecessors, relies on STEM instead of superhero abilities. Using mechanical wings and drones, Wilson combines physics and technology to battle his enemies as well as critical thinking skills.

“That is STEM in action. What I’m trying to tell kids is that, just like Captain America, if you develop critical thinking skills and you develop skills in STEM, you can use those skills to create a better tomorrow for yourself and your community,” Mackie said.

While Mackie uses his brother’s work on-screen to inspire local students, he emphasizes the hard work his brother puts into getting to this level today. Together, Mackie believes that diligence and a strong education can launch children from the same humble beginnings of his brother to become successful STEM professionals. 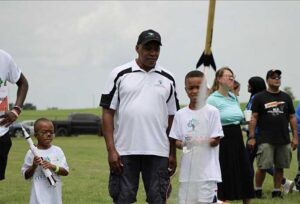 Outside of the character Sam Wilson, Mackie has cited other similarities between the Marvel Cinematic Universe and STEM. He referenced 2018’s Black Panther Film which depicts Black intellectuals in an environment that is heavily based on STEM. The fictional world of Wakanda demonstrated the heights that societies could reach by utilizing science, technology, engineering, and mathematics.

Comparisons to Marvel characters have resonated with students that participate in STEM Global Action’s Programs. Karson Williams, a New Orleans 5th grader, is a regular participant after starting STEM Global Action three years ago. Williams shared that he has enjoyed the program as it has grown his interests in STEM, specifically math and engineering. Combined with his love of Marvel characters, such as his favorite Spiderman, Williams has been able to recognize STEM in real life.

“Most of [Marvel characters] do some form of engineering like Spiderman or Iron Man and Hulk, who is a scientist,” Williams said. “So, it makes kids want to be like them and their professions and what they do.”

While Mackie uses Marvel characters to get his foot in the door with students, he doesn’t make using pop culture and entertainment references a regular occurrence. The STEM educator believes that more students should admire scholars and intellects and not just entertainment figures, only.

“I think we’re doing ourselves a disservice when we just use entertainment to push education, so I use everything,” Mackie said.
Recently, Mackie was able to secure major donation investments to construct a state-of-the-art education hub in New Orleans East, but he first started his educational organization in his garage in 2013. After being disappointed in the quality of the STEM education his son was receiving, Mackie began holding sessions in his garage. The number of kids attending grew from two, his sons, to 20 to now 100,000. As STEM Global Action grows, Mackie continues to find more innovative ways to bring STEM to the community.