By David Martosko and K.B. Mensah

WASHINGTON — Among the acting secretary of Homeland Security’s final acts in office was an order on Monday to beef up D.C.’s Inauguration Day security nearly a week earlier than planned. And less than a week after a deadly onslaught at the U.S. Capitol, the building had already begun to assume a high-security posture.

The tension grew thicker on Tuesday when the Department of Justice announced that it had opened more than 170 criminal cases related to the Jan. 6 Capitol building invasion. Acting U.S. Attorney for the District of Columbia Michael R. Sherwin said those cases would expand “geometrically,” suggesting a broad dragnet. Charges will range from trespassing to seditious conspiracy and felony murder, Sherwin said.

Acting Homeland Security Secretary Chad F. Wolf said Monday in a statement that the show of force, meant to deter any future violence, would grow considerably — and soon. 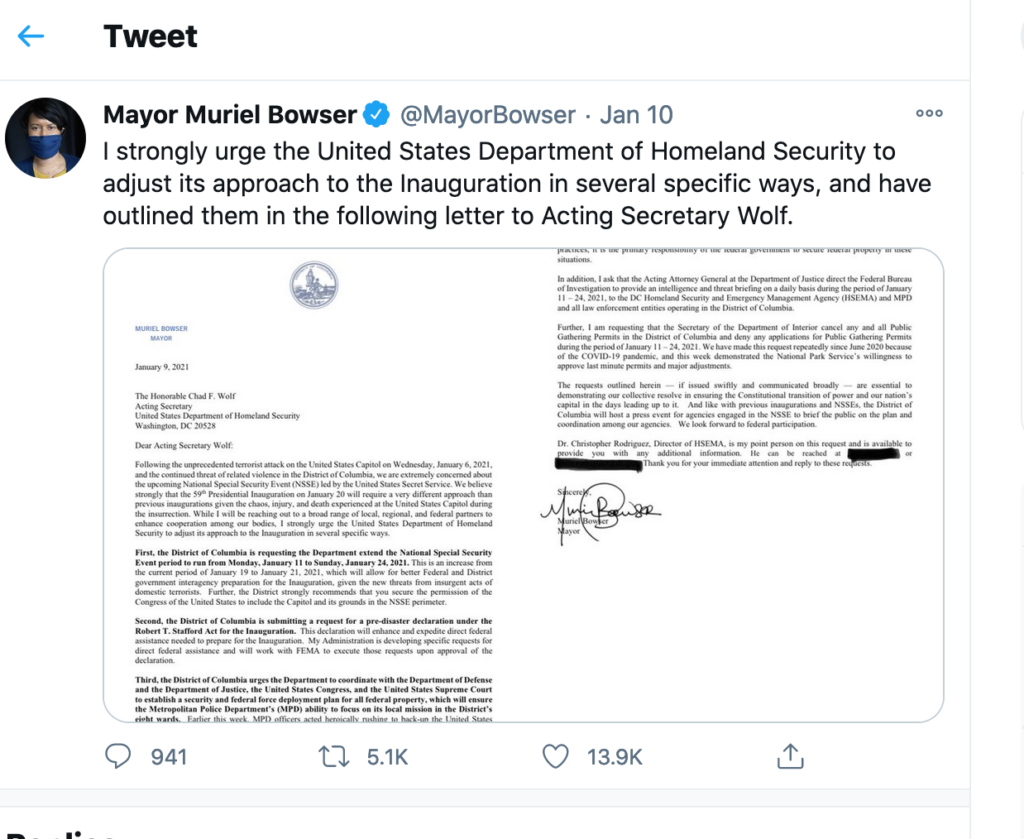 Hours later Wolf said Monday would be his last day running the Department of Homeland Security. He cited “recent events,” including a series of court rulings that cast doubt on whether President Donald J. Trump had appointed him to run the agency legally. Pete T. Gaynor, the administrator of the Federal Emergency Management Agency, will take over for Wolf until the Trump administration ends, on Jan. 20 at noon.

The National Park Service said Monday that “credible threats to visitors and park resources” forced it to shut down all access to the Washington Monument until five days into President-elect Joseph R. Biden Jr.’s administration.

The Pentagon has 6,200 National Guard troops stationed in Washington, a number that will rise to 10,000 by Jan. 14, Army Gen. Daniel R. Hokanson told reporters on Monday — and could crest at 15,000 if Capitol Police, the U.S. Secret Service and U.S. Park Police request more.

Washington, D.C. Mayor Muriel E. Bowser had asked Wolf on Saturday for a Jan. 11 start to a planned show of force in advance of Biden taking his oath of office. Bowser asked the Department of Interior to cancel all permits in Washington for protests and other gatherings for two weeks, beginning Jan. 11. She also wanted daily FBI threat-assessment briefings for her city’s police force and Emergency Management Agency.

Much of Washington will be on lockdown by Wednesday, one week after what Democratic House Speaker Nancy P. Pelosi called an “insurrection” at the U.S. Capitol. A mob supporting Trump stormed the seat of American legislative power on Jan. 6, directly resulting in the deaths of U.S. Capitol Police officer Brian D. Sicknick and rioter Ashli Babbitt, shot by an officer as she tried to climb into a corridor through the frame of a broken window.

A makeshift memorial to Sicknick popped up Saturday near the Capitol, including notes to his family members.

The Jan. 6 siege was one of at least a half-dozen violent attacks there in America’s history. While the British arson in 1814 is the most famous, but the most deadly came in 1998 when a mentally ill man shot and killed two Capitol Police officers at a security checkpoint. Visitors can still see where a bullet ricocheted off a nearby statue of former Vice President John C. Calhoun.

Other assaults on the Capitol have been partisan onslaughts. A quartet of Puerto Rican nationalists fired about 30 gunshots from the House of Representatives visitors gallery in 1954, injuring five congressmen.

The radical Weather Underground group detonated an explosive at the Capitol in 1971 after President Richard M. Nixon ordered bombing runs in Laos. And in response to President Ronald W. Reagan’s 1983 invasion of the island of Grenada, the May 19 Communist Movement bombed the U.S. Senate. Neither of those attacks resulted in any casualties.

Law enforcement officers confiscated five firearms from rioters on Jan. 6. Carrying a gun on the Capitol grounds is a federal felony.