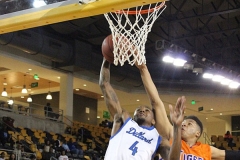 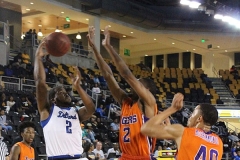 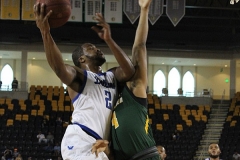 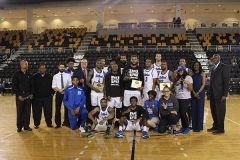 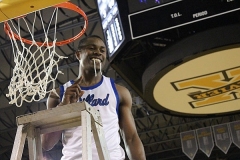 Photo’s by Kaelin Maloid – Dillard University Men’s Basketball Team are the Gulf Coast Atlantic Conference Champions for the second year in a row. Despite going 11-1 in the GCAC and receiving a first-round bye for the tournament, Dillard University Men’s Basketball Head Coach, Mike Newell, said he “wasn’t going to take anything for granted.” According to Newell, there’s always a chance a player or team can get inspired. Fortunately, both rounds the Bleu Devils participated in were blow-outs. In the first game, they demolished the Tigers of Edward Waters College 103-78, and in the Championship game, they beat the Panthers of Philander Smith 86-65, the only team in the GCAC to hand Dillard a loss this season. Winning the championship for the second season in a row eased the snub for Coach of the Year and Player of the Year the Bleu Devils felt they had, according to Senior Demetric Austin, who was voted the MVP of the tournament. Both Newell and Austin agreed the Bleu Devils were going to party since they were, of course, in the City of New Orleans. Next up for the Bleu Devils is the NAIA Tournament in Kansas City, Mo., which Austin says the Bleu Devils are prepared. Newell gave the Bleu Devils one day off, but after that, it’s back to practice to prepare for the NAIA Tournament.