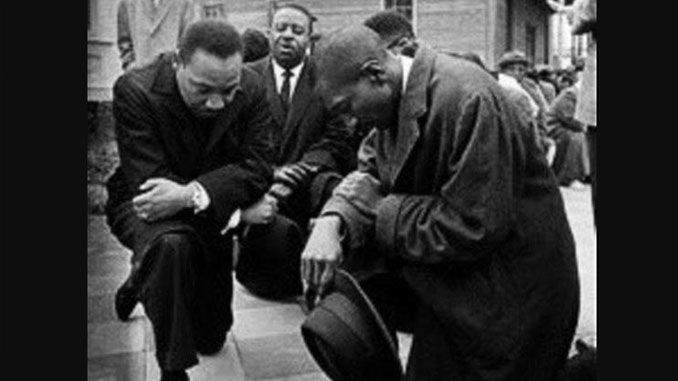 Donald Trump Make America White Again
Donald Trump’s short presidency is one that has been by most accounts, filled with chaos and confusion and may cause long-term damage to the nation domestically and globally. We are witnessing our nation being divided by a president who plays footsie with White nationalists, offends our allies and has us on the verge of a nuclear war with North Korea. But this week, Trump is battling with NFL players who have chosen to peacefully protest racial inequality in America.  Going even further,  Trump rescinded an invitation to the White House to the Golden State Warriors via Twitter after feeling slighted that the team may not accept it.
Later, while speaking at a rally in Alabama, the place where many of the greatest civil rights protests took place, Trump used the opportunity to recall the Confederacy’s ugly past by calling NFL Players SOB’s and demanding that the owners should fire them for their protests. His tone was reminiscent of Alabama Governor George Wallace who said in his 1963 Inaugural Address; ‘Segregation Now, Segregation Tomorrow, Segregation Forever” as the Civil Rights movement was in full swing.  Wallace’s statements and actions shined the light on the bigotry and racism was the law of the land at that time in Alabama and all throughout the south.
Black Power In the 21st Century
Today, racial resentment is rife among Whites as they see a nation changing; where the pop cultural landscape has many Blacks at the top of their fields, from Lebron James, and even New Orleans own Percy “Master P” Miller and Bryan “Birdman” Williams. Additionally,  Blacks in many fields of endeavor have risen to top levels in education, business, and politics; with the crowning achievement being Barack Obama being elected the first African-American President. Ironically, this great achievement for our nation is where Donald Trump began his political ascent as the forefront of the birther movement; questioning whether the President was born in this country. Which in and of itself is both silly, sickening and shows ignorance of basic civics.
While there are problems with police brutality and inequality, today unlike yesterday, Blacks do not have to be invisible. No longer do we have to pretend to scratch where we do not itch, no longer does one have to feign ignorance and wear a smile when nothing is funny to get along with Whites. Today, is a time where having the courage to take a stand against what is wrong with this country as it relates to racial inequality is no longer swept under the rug. This is what Colin Kaepernick and many others are doing, and this is in the spirit of dissent that is as part of the American story.
America’s History of Dissent and Fighting Against Tyranny
From the Boston Tea Party, the Civil Rights Revolution, the Women’s Movement and many others, acts of civil disobedience were a rallying cry to amend and correct the wrongs of a society. In fact, these things were done to make the nation a more just place, where the country could move closer to its creed that all people not just being created, but in this case treated equally.
The President’s words and actions throughout his time as Commander-In-Chief, if this was a football game would receive a penalty for unsportsmanlike conduct. His words are divisive and unpresidential. It is sad for our nation that our leader has the comportment and temperament of a small child. As opposed to focusing on the things that matter, he lacks vision, he is small and petty and behaves erratically like someone with ADHD and this is not a good trait for a president who has access to the nuclear codes and the leader of the free world.
Team America: Different Jerseys Same Team
The President ignited controversy this weekend when he and his spokespeople  spoke of him being offended by NFL players protesting because it is disrespectful to the flag and the soldiers. This faulty logic that he uses as a litmus test of patriotism is shortsighted, and shows his ignorance of American history; where civil disobedience and dissent is as American as apple pie. Patriotism or acts of it are not as black and white as Trump and his surrogates paint; except in the worst of dictatorships, where blind patriotism is expected and any form of dissent punishable in some cases by death. This is not the country we live in. It is one that amended itself into becoming a more perfect union, and today it seems we need to mend ourselves and our imperfect nation and understand we are all on the same team as Americans. And we all want freedom, justice and equality; when this day finally comes we, all win and no one has to take a knee but we can stand together.

Purple and Gold on a Roll